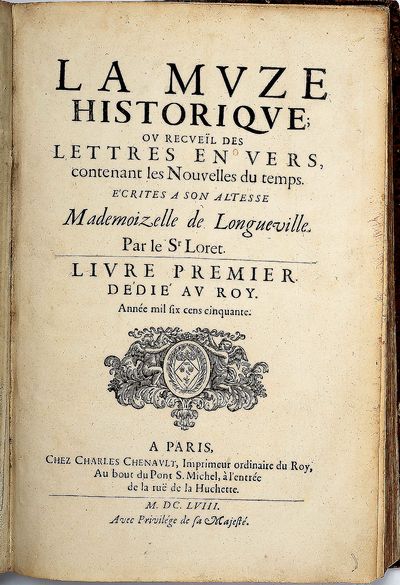 This volume collects the first two years of Loret's weekly gazette reporting on the news of Paris society and the court of Louis XIV. The letters were composed and dedicated to Marie d'Orléans-Longueville and they were published by Charles Chenault beginning in 1656. Beginning in 1650, Loret's letters were initially handwritten. Very popular, these were copied and passed around the Court. In 1652, the letters became the object of unauthorized printing, under the titles of "La Gazette du temps en vers burlesques" and "Gazette nouvelle en vers burlesques".


As a result, Loret decided to have the letters printed under his control. Beginning in April 1655, Loret's letters were printed regularly by the publisher of Charles Chénault, to whom Loret ceded and transported the royal privilege granted to him on March 19. Beginning in 1658, they were published in an annual collection by Chénault entitled La Muze historique (as here). Chenault continued to publish Loret's letter annually until 1665.

"Festivals, royal feasts, theatrical performances, balls and ballets at the king's or the rich lords of the court, births, marriages and illustrious deaths, literary news, appearance of new books, sermons of preachers in vogue, new institutions and useful inventions, curiosities of all kinds, mysteries of the alley, and sometimes even secrets of the alcove. Loret keeps note of everything, reveals everything, describes everything in abundant and easy verses, spiritual and naïve, burlesque, but full of common sense, free, but not brazen, always imbued with a deep respect for the truth."----Eugene Hatin

"This collection contains all the remarkable facts, political, literary, all the noises of the city, all the foreign news that occupied the minds from 1 January 1650 until 1665...that Loret's letters, often pungent in their naivety, are today the only monument that remains, perhaps, of the political and literary opinions of, this fruitful period; that the Fronde, the plots to which it gave rise, the characters in it...are appreciated according to the spirit of the time, always in good faith, often with spirit."
— Viollet-le-Duc.


Very little is known about Jean Loret who was, perhaps, the first French society journalist to document the social events at the Court of Louis XIV. The ever dependable J. Thomas in his Universal Pronouncing Dictionary of Biography does better than most in describing Loret: "A French rhymer, born in Normandy. He began to issue in 1650 a weekly newspaper called Gazette en Verses burlesque...From 1656-1665 it was published under the title of Muze historique."

Loret reported on politics, theatre, literature, court affairs, street events, and offered amusing gossip relating to social and artistic life. Loret began to be invited to all manner of parties and balls in the hopes that he would write about them in his paper.

Having received almost no early instruction, Jean Loret trained himself and quickly showed some gifts as a writer. At the age of 17, he left for Paris and managed to be introduced to the Court by putting himself in the service of Henriette Marie de France. Originally, Loret had the idea of dedicating and sending his verse each week to Marie d'Orléans-Longueville,who later became Duchess of Nemours, Marie d'Orléans, who appreciated his verse, became Loret's muse. She paid him an annual annuity of 1,000 livres. Loret had other well-placed patrons in Mazarin's court: Mademoiselle de Montpensier, Anne of Austria and Superintendent Fouquet.

Until March 1655 these letters were untitled "To Her Highness Mademoiselle de Longueville, then with the title Letters in verse to Her Highness the Duchess of Nemours.


La Muze Historique gave rise to several imitations. "Letter in verse to Her Highness Madame the Duchess of Nemours" was published from 25 May 1665 to 29 Sept. 1666 by a continuation at the same bookseller, 1672 this form of epistolary prose gave rise to Donneau de Visé's Gallant Mercury . The genre became commonplace in laterEuropean printed newspapers, and in the eighteenth-century media in general. We are indebted today to Loret for his concept of society reportage.