The Life of Stonewall Jackson. From Official Papers, Contemporary Narratives, and Personal Acquaintance....Reprinted from Advance Sheets of the Richmond Edition. 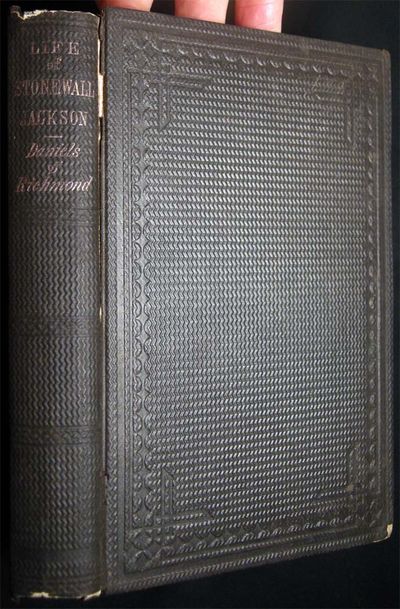 by A Virginian (John Esten Cooke)
New York, NY: Charles B. Richardson, 1863. 305 + (4) pages of publishers' announcements at back; there is a Notice before the portrait frontispiece, mentioning the separate availability of "...a portrait of Stonewall Jackson, engraved on steel by one of the best artists in the country. It is copied from a photograph taken just before the battle of Chancellorsville for Mrs. Jackson, and is the only authentic picture..." The frontis portrait is this image mentioned; tissue-guarded, foxed & spotty; with another engraved portrait in the text of General Ewell. Biographical material on Jackson, first published soon after his death in Richmond, followed by this edition. With his early years, education and chapter-by-chapter detail of his many Civil War military engagements by John Esten Cooke, (1830 - 1886) Virginia author "...Believing that the election of Abraham Lincoln was a catastrophe for the South, he was a strong advocate of secession. When Virginia did secede, he immediately joined the Confederate army ...he managed to write The Life of Stonewall Jackson, published in 1863, between military engagements, as well as poems and reports for Richmond newspapers...." (Ritchie Devon Watson in the ANB) Approx. 5 1/4" x 7 1/2" size; bound in the publishers' dark brown decoratively blind-stamped textured cloth; gilt spine titles (dulled). Some edge, tips wear and spine edge-chipping; crown & base of spine cloth chipped away; in good condition.. First Union Edition. Hard Cover. Good. (Inventory #: 027299)
$125.00 add to cart or Buy Direct from Certain Books
Share this item
Certain Books
Offered by