[THOMAS JEFFERSON] [AMERICANA] NOTES ON THE STATE OF VIRGINIA 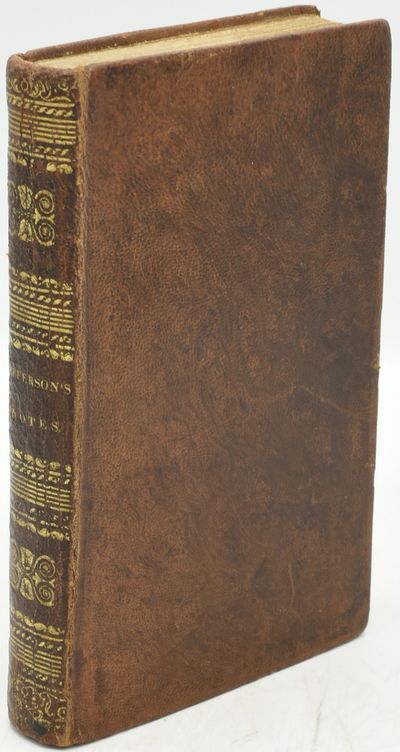 by Thomas Jefferson
Boston: Wells and Lilly, 1829. Full Leather. Very Good binding. 12mo.; in full mottled calf, with elaborate rules, decorations and lettering to the spine; [iv], 1-280 pages, including the Speech of Thomas Jefferson; President of the United States, Delivered at his Instalment, March 4, 1801, at The City of Washington".; there are no ownership or other marks of any kind in this copy; there is scattered foxing throughout.~~First published in 1783, this is the first printing of Jefferson's Notes after his death. The only full length book penned by Mr. Jefferson, many consider it to be the greatest American book written before 1800. It was in fact not without controversy. History William Peden edited the 1955 University of North Carolina Press edition. In his Introduction, he writes: "In the Notes on Virginia Jefferson at one time or another criticizes most of the vested interests of his time. He attacks the assumptions and usurpation of power by the rich, the powerful, and the well born; the tyranny of the church; the dogmas of the schoolmen; the bigotry of the man on horseback; the enslavement of man by man; the injustice of racial superiority."~~An attractive copy of this near pocket-sized edition; with minimal wear. (Sabin 35907; Howes J-28; Peden (Editor), Notes on the State of Virginia, Chapel Hill, 1955 (xxiii).). Very Good binding. (Inventory #: 294431)
$750.00 add to cart or Buy Direct from
Black Swan Books
Share this item

[GEN. WASHINGTON] MONUMENTS OF WASHINGTON'S PATRIOTISM: CONTAINING A FACSIMILE OF HIS PUBLIC ACCOUNTS, KEPT DURING THE REVOLUTIONARY WAR; AND SOME OF THE MOST INTERESTING DOCUMENTS CONNECTED WITH HIS MILITARY COMMAND AND CIVIL ADMINISTRATION

Washington : Published by the Trustees of Washington's Manual Labour School and Male Orphan Asylum, for the Benefit of that Institution , 1841
(click for more details about [GEN. WASHINGTON] MONUMENTS OF WASHINGTON'S PATRIOTISM: CONTAINING A FACSIMILE OF HIS PUBLIC ACCOUNTS, KEPT DURING THE REVOLUTIONARY WAR; AND SOME OF THE MOST INTERESTING DOCUMENTS CONNECTED WITH HIS MILITARY COMMAND AND CIVIL ADMINISTRATION)