A collection of eleven first and later editions, and one holograph letter by Anne Grant (1755-1838), the Scottish poet, memoirist and prolific correspondent 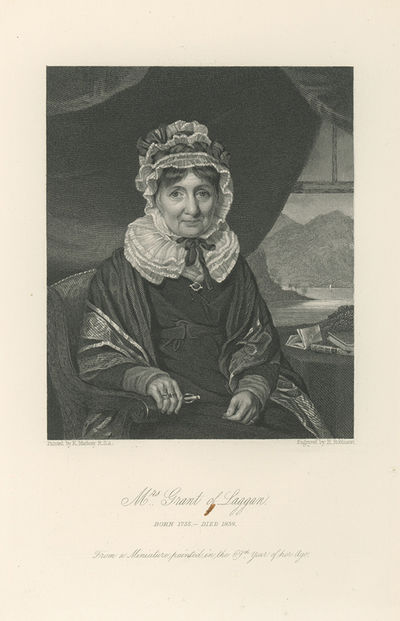 by GRANT, ANNE, OF LAGGAN
Various publishers and locations, including London, Edinburgh, New York and Philadelphia, 1803-1903, 1803. Condition varies, from good to fine; a full description of the collection, with bibliographical details, is available upon request.. Eleven volumes and one manuscript letter. The titles include Poems on Various Subjects (1803); Letters from the Mountains (1806); Memoirs of an American Lady (1808); Essays on the Superstitions of the Highlanders of Scotland (1811); The Highlanders and Other Poems (1813); and Eighteen Hundred and Thirteen: A Poem (1814). The holograph letter by Grant is to Irish poet and biographer James Wills (1790-1868), concerning his manuscripts, writings and potential contributions to Blackwoods Magazine. Grant was famous her works on Scottish lore and history, especially Letters from the Mountains; Being the Real Correspondence of a Lady, Between the Years 1773 and 1803; and her account of life in New York, where she lived as young girl, in Memoirs of An American Lady, With Sketches of Manners and Scenes in America as They Existed Previous to the Revolution. See the ODNB for both Grant and Wills. (Inventory #: 28602)
$4,500.00 add to cart or Buy Direct from
Brick Row Book Shop
Share this item

History of Romances. An Enquiry into their Original; Instructions for Composing them; an Account of the Most Eminent Authors; with Characters, and Curious Observations upon the Best Performances of that Kind . . . Made English by Stephen Lewis

London: Printed for J. Hooke and T. Caldecott, 1715 , 1715
(click for more details about History of Romances. An Enquiry into their Original; Instructions for Composing them; an Account of the Most Eminent Authors; with Characters, and Curious Observations upon the Best Performances of that Kind . . . Made English by Stephen Lewis)
View all from this seller>