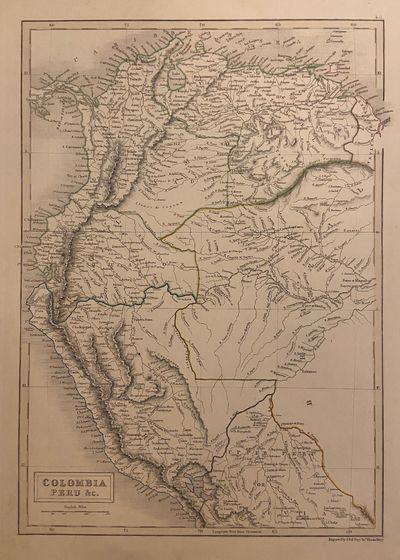 by HALL, Sidney
London: A & C Black, 1840. Map. Steel engraving. Sheet measures 14 3/4" x 10 3/8" This highly detailed map of the northwestern South America shows the political divisions of the region in a crisp style made possible by advances in steel engraving technology which was typical of British map-making of this period. Elegant hand coloring indicates boundaries between Peru, Brazil, and Gran Colombia - with the separate states of Ecuador, Venezuela, and New Granada. Cities, rivers, and roads are all meticulously rendered. Topographical features are shown by hachure. The map is in very good condition. Minor tears to margins. Sidney Hall (1788 - 1831) was an English engraver best known for his maps of the New World and the United States. His work was included in several map and atlas publications by some of the most prominent publishers in London. Adam Black (1784-1874) was a Scottish publisher and politician who, with his brother Charles, founded the A & C Black publishing company. Together they published a wide range of materials, including atlases, medical books, and the 7th, 8th and 9th editions of the Encyclopedia Britannica. This map is a fine example of their work. (Inventory #: 302380)
$100.00 add to cart or Buy Direct from
Argosy Book Store
Share this item

New York : Beers, Comstock, & Cline , 1870
(click for more details about Webster)
View all from this seller>