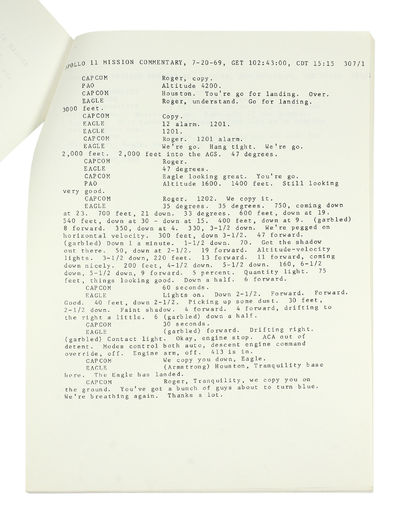 by [Apollo 11 Moon Landing].
27 leaves. [Houston: Control Center, 20 July 1969]. 27 leaves, 280 mm x 210 mm, stapled in the top left hand corner, and preserved in a custom made fold over case, blue-green cloth with gilt spine label. Fine. § First issue of a press release handed out in Houston at the time of the landing, comprising transcripts prepared by NASA from the Mission tapes. Obviously, these were produced in some significant quantity but they are and always have been very scarce on the market. Anecdotally, the bookseller John Jenkins went to Houston and collected as many of these as he could, for which he then had matching boxes made. Since 1971, we have seen three sets, all in identical boxes, and as far as is known they have not been reproduced since. The content is, of course, the stuff of legends: “Houston, Tranquility Base here. The Eagle has landed” -- material to recall one of the greatest moments in human achievement. (Inventory #: 124191)
$6,750.00 add to cart or Buy Direct from
John Windle, Bookseller
Share this item

London : Faber and Faber , 1945
(click for more details about All Hallows' Eve.)
View all from this seller>