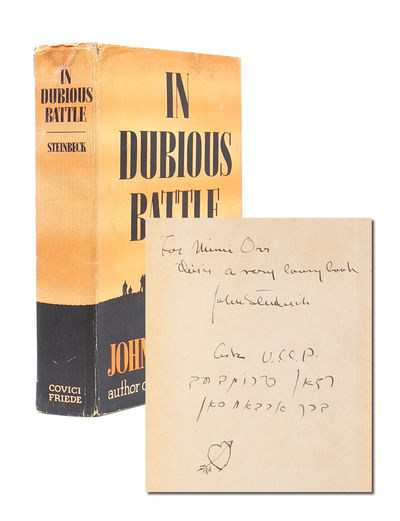 by Steinbeck, John
New York: Covici Friedi, 1936. First edition. A Very Good+ copy in like dust jacket. Cloth a bit soiled, faded on the spine. Dust jacket with a few short tears and small chips at the corners, evidence of tape removed from the verso of the jacket. A slightly worn, but presentable copy overall.

Playfully inscribed by the author: "For Mimi Orr this is a very lousy book John Steinbeck." Below this, in the same ink are some additional lines in Hebrew or Yiddish (one line apparently a name, Avramson or Abramson). These lines may have been written by Chicago bookseller, Ben Abramson, whom Steinbeck visited in 1937, during a cross-country road trip. According to one biographer, "The Steinbecks purchased a red Chevrolet in New York 'having gotten rid of their old car prior to going to Europe,' and started home, stopping by Chicago to visit John's uncle, Joe Hamilton, and Ben Abramson. Abramson had offered a bloodhound puppy to the Steinbecks, which they were supposed to pick up and take back with them" (Benson). Our assumption is that Mimi Orr was a friend or client of Abramson. The relationship between Steinbeck and Abramson has been well documented, with Abramson being an early advocate for the author's work. Indeed it was Abramson who introduced Pascal Covici to Steinbeck's work, encouraging the publisher to release Steinbeck's next few books (including this one).

Historically overshadowed by Steinbeck's towering works East of Eden and The Grapes of Wrath, his later novel In Dubious Battle has seen a resurgence of scholarly interest for its depictions of race and class. In developing the novel's central structure, "Steinbeck utilized episodes from the Tagus Ranch peach strike of 1933 and a cotton strike throughout the San Joaquin Valley that October"; while he "deviated from the particulars of these labor dispites to clarify the central themes of the novel...In Dubious Battle indicates that the primary responsibility for human suffering rests on the growers, since they preside over an economic framework that limits the opportunities available to the working class" predominantly composed of people of color (Dawson). Steinbeck's emphasis on laborers unionizing to fight back against their abusers -- predominantly powerful, white men -- are concerns that continue resonating today. In Dubious Battle made its appearance on the big screen in 2017, as a film directed by James Franco. (Inventory #: 4400)
$9,500.00 add to cart or Buy Direct from
Whitmore Rare Books
Share this item

New York : Charles Scribner's Sons , 1938
(click for more details about The Yearling)
View all from this seller>