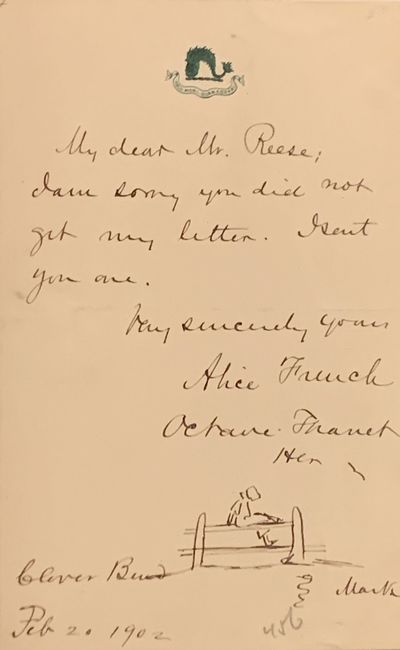 by FRENCH, ALICE [THANET, OCTAVE]
As a popular and successful writer, French is known by her pseudonym, Octave Thanet. She gained national success for her short fiction and novels written in the "local color" genre popular in the late 1860's to the early 20th century. Her politics were conservative and her stories championed the status quo, however, she gained renewed interest for her sexual orientation. She lived openly with her widowed friend, Jane Allen Crawford.

French writes to Mr. Reese apologizing for her letter that failed to arrive and including a lovely sketch of a girl sitting on a fence and flying bird captioned, "Her Clever Bird Mark." Above the drawing she signs with both names, "Alice French Octave Thanet." Autograph (Inventory #: 4811)
$300.00 add to cart or Buy Direct from
Schulson Autographs
Share this item


(click for more details about Ginsberg photographed at a party, ca 1970,)