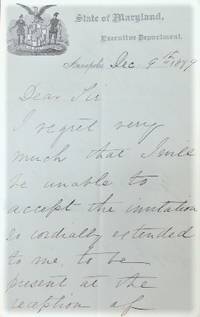 by CARROLL, JOHN LEE
Annapolis, Maryland, 1879. Written in long-hand on stationery from the State of Maryland Executive Department, Dec. 9, 1879. " Dear Sir, I regret very much that I will be unable to accept the invitation so cordially rxtended to me, to be present at the reception of General U.S. Grant in the City of Philadelphia on the 16th instant. I have the honor to be your able-servant, John Lee Carroll". Addressed to Joseph H. Paist, Esq, Phila. We find that there was indeed a parade and reception for the Civil War General and US President on 16 December, 1879 in Philadelphia. Carroll served as Governor of Maryland from 1876-1880. He was Governor during the Great Railroad Strike of 1877, with widespread rioting in Baltimore requiring Federal troop intervention. See photos of the letter. . Signed by Author. Almost No Wear. 8" x 5". (Inventory #: 015138)
$150.00 add to cart Available from Glenn Books
Share this item
Glenn Books
Offered by

THE POETIC AND DRAMATIC WORKS OF ROBERT BROWNING

Boston and New York : Houghton, Mifflin and Company , 1899
(click for more details about THE POETIC AND DRAMATIC WORKS OF ROBERT BROWNING)

by ANTHONY, EARL OF SHAFTESBURY

Birmingham : John Baskerville , 1773
(click for more details about CHARACTERISTICKS OF MEN, MANNER, OPINIONS, TIMES)
View all from this seller>