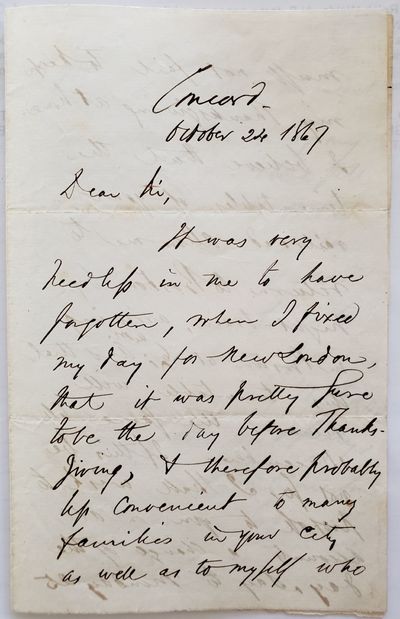 signed
by Emerson, Ralph Waldo
Emerson, Ralph Waldo. American Writer and Philosopher. Autograph Letter Signed by Ralph Waldo Emerson. Dated October 24, 1867 from Concord, MA. Letter addressed to G. F. Tinker in New London, CT. 3 pages. Bifold octavo sheet. Signed "Respectfully, R. W. Emerson". In this letter, Emerson suggests that they reschedule a lecture due to Thanksgiving. Emerson apologizes he hadn't thought through the calendar when he agreed to speak, as he had forgotten about the Thanksgiving holiday. "It was very heedless in me to have forgotten, when I fixed my day for New London, that it was pretty sure to be the day before Thanksgiving, and therefore probably less convenient to many families in your city as well as to myself who must not fail to keep my Thanksgiving at home." Thanksgiving only became a national holiday four years earlier in 1863, when President Lincoln proclaimed the final Thursday of November a national holiday. Emerson has an interesting connection to the founding of this new holiday; his friend Sarah Josepha Hale wrote a series of editorials prompting Lincoln to declare the national day of Thanksgiving. Hale also worked with Emerson on numerous projects; she was editor of Godey's Lady's Book, a popular magazine at the time, and she published many of Emerson's writings. He closes the letter by mentioning the topic of his program: "For the subject of my lecture, I incline still to adhere to that already named 'The Man of the World.'" Two horizontal creases from original fold lines. In very good condition. A nice reflection on his celebration of Thanksgiving. (Inventory #: 15411)
$1,500.00 add to cart Available from
Share this item
Max Rambod Inc.
Offered by

Ralph Waldo Emerson Sends Warm ALS and Gift to a Friend, Days Before She Marries Into His Family, 1873


(click for more details about Ralph Waldo Emerson Sends Warm ALS and Gift to a Friend, Days Before She Marries Into His Family, 1873)