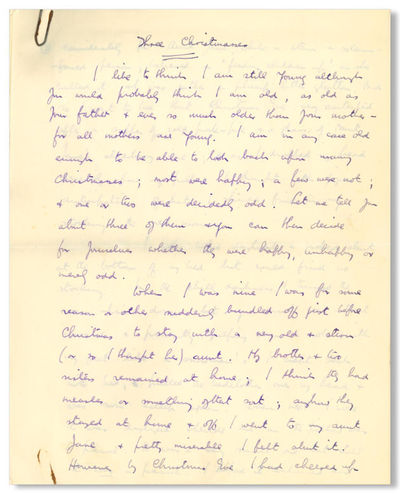 by Southwold, Stephen [a.k.a. Neil Bell (born Stephen Henry Critten)]
[Np], [nd]. Small quarto. Twelve-page autograph manuscript, written on rectos only. Folded, paper clip, otherwise very good. Manuscript, signed "Stephen Southwold," of his children's story "Three Christmases," with only a few small corrections and additions in the text. The story is about an author who prefers a good meal to a book as a Christmas gift. Born Stephen Critten, Southwold was a prolific novelist under various pseudonyms (most often "Neil Bell"), eventually adopting one of them, Southwold, as his legal name. A considerable number of his novels were fantasy or science fiction. (Inventory #: WRCLIT86233)
$250.00 add to cart or Buy Direct from
William Reese Co. - Literature
Share this item