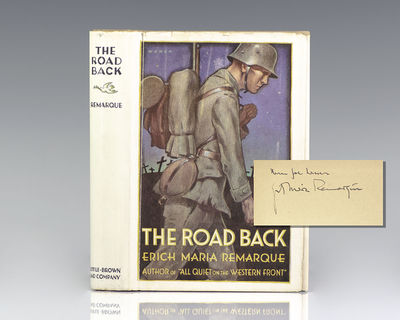 by Remarque, Erich Maria
Boston: Little, Brown and Company, 1931. First American edition of the sequel to Remarque's masterpiece All Quiet on the Western Front. Octavo, original cloth. Presentation copy, inscribed by the author on the front free endpaper. Near fine in a near fine dust jacket. Jacket design by Paul Wenck. We have never seen another signed example of this title. Set a few weeks after the end of All Quiet on the Western Front, The Road Back details the experience of young men in Germany who have returned from the trenches of World War I and are attempting to integrate back into civilian life. Its most salient feature is the main characters' pessimism about contemporary society which, they feel, caused the war and does not wish to reform itself. It was first serialized in the German newspaper Vossische Zeitung between December 1930 and January 1931, and published in book form in April 1931. (Inventory #: 129730)
$7,200.00 add to cart or Buy Direct from
Raptis Rare Books
Share this item

Plunging into Politics: How to Become or Support a Candidate of the National, State, of Local Level.

by Loeb, Marshall and William Safire

New York : David McKay Company, Inc. , 1964
(click for more details about Plunging into Politics: How to Become or Support a Candidate of the National, State, of Local Level.)