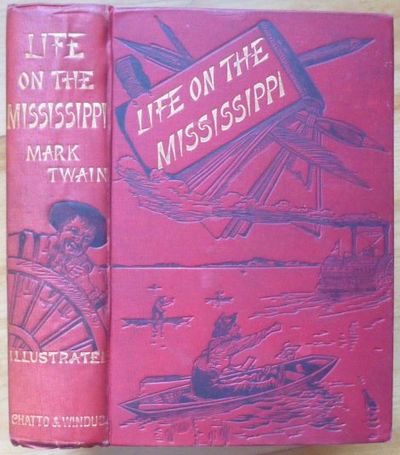 First Edition, which was published five days before the American one (and is considerably scarcer: although the number of English copies is not known, we would surmise that it might have been no more than one-tenth of the 50,000 American copies). LIFE ON THE MISSISSIPPI is really two books combined. The first twenty-one chapters are his early impressions of the great river..., written [and serialized] in 1875 [and] here reprinted, with the balance of the book, chapter twenty-two to the end, being his [new] story of his trip down the river as an honored guest. [Johnson]. This copy has a March 1883 ad catalogue, which is the earliest we have seen (the book was actually published in May 1883); Blanck notes that copies have ads dated as late as 1889, and in fact we have had a copy with ads dated July 1893. This is a near-fine copy of this handsomely-bound book: there is scarcely any wear other than a faint crease in the spine cloth, plus hairline cracks in the delicate patterned endpapers; atypically, the red spine has scarcely any fading. Blanck 3410; McBride p. 86 (rebound -- the Hartford collections do not include a copy in original cloth, which is why this title is not pictured with the other Chatto & Windus Twain bindings on p. 154); Johnson p. 43. Housed in a lettered stiff cloth wrapper. Provenance: book-label on rear endpaper of Books Inc., "The West's Oldest Independent Bookseller" -- this copy has the Fairmont Hotel address, which dates back to 1946 and the founding of Books Inc.; two years later it merged with the remnants of Anton Roman's original business, founded in 1851 and a publisher of Mark Twain during the 1870s. (Inventory #: 14859)
$775.00 add to cart or Buy Direct from
Sumner & Stillman
Share this item

1892
(click for more details about YVERNELLE. A Legend of Feudal France)

1871
(click for more details about Autograph Letter Signed, addressed to "Theodore Roosevelt Esq. | Chairman, etc.)
View all from this seller>