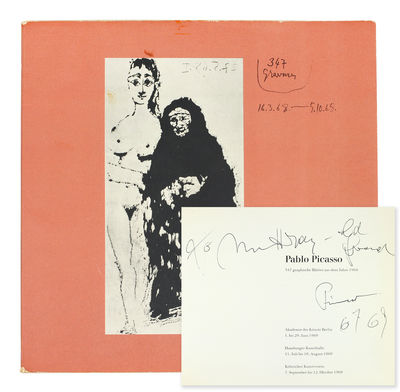 by Picasso, Pablo.
Square 8vo. Berlin: Akademie der Künste, 1969. Square 8vo, unpaginated. Black and white photo reproductions of artworks throughout. Text in German. Original pink, illustrated wrappers; a very good copy, very lightly worn at extremities, one small spot on the upper wrapper; inside flap and endpapers with shadows from previous tape and two small remnants, a few numbers handwritten on the rear endpaper. § Inscribed by Picasso "To [Walter Kohner] - old friend" and dated 6.7.69. The catalogue of an exhibition of drawings and prints created by Picasso between March 16 and October 5, 1968 in Mougins. "The sheets, to which the artist gave no title, are all dated and numbered in the order in which they were created. In this chronological order they are also shown in the exhibition, so that the viewer is drawn into the dramatic tension of this work process in a unique way from page to page and from day to day - sometimes six or seven graphics were created in one day." (Introduction, translated)The exhibition was staged in three locations in Germany between June 1 and October 12, 1969. The introduction to the catalogue was written by Boris Blacher and short essays were contributed by Friedrich Ahlers-Hestermann and Felix Andreas Baumnn. Provenance: Kohner family. Picasso's handwriting is illegible, however the family records that Picasso inscribed the book to Walter Kohner, a theatrical agent who worked alongside his brother at the legendary Paul Kohner Agency on Hollywood Boulevard, representing stars including Greta Garbo and Ingrid Bergman. Walter, Paul, and a third brother, Frederick (the novelist, screenwriter and author of the "Gidget" books), were born in Czechoslovakia but emigrated to California as the Nazis gained sway in Europe. Walter's childhood sweetheart Hanna remained in Europe and miraculously survived internment in four concentration camps, including Auschwitz, before reuniting with Walter at the end of the war. Their own account of their remarkable story was published in 1984. In 1953 Hanna told their story on This is Your Life - the first non-celebrity ever to appear on the show. (Inventory #: 124343)
$4,750.00 add to cart or Buy Direct from
John Windle, Bookseller
Share this item

Two Years Before the Mast: A Personal Narrative of Life at Sea

New York : Harper Brothers , 1840
(click for more details about Two Years Before the Mast: A Personal Narrative of Life at Sea)

Aphorisms on Man: Translated from the Original Manuscript. Third edition.

London : J. Johnson , 1794
(click for more details about Aphorisms on Man: Translated from the Original Manuscript. Third edition.)
View all from this seller>