[A Nonce Volume of Nineteen Bruno Imprints (plus one duplicate)] 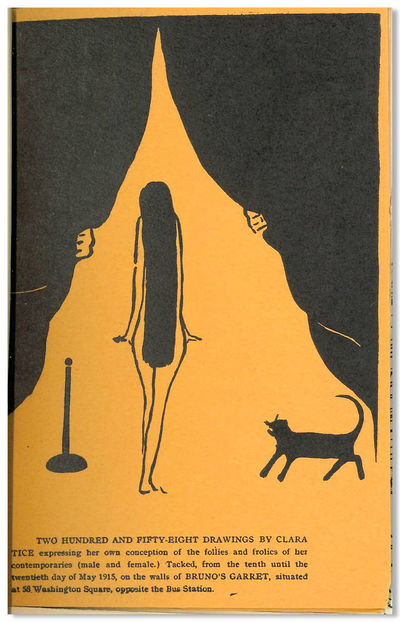 by Bruno, Guido (pseud. of Curtis J. Kirch) [publisher]
Greenwich Village, New York City, 1915. Large octavo and smaller. Pictorial wrappers, single sheets and leaflets. Bound up in slightly later plum cloth, spine lettered in gilt ('Greenwich Village II 1915'). One item has a clean tear and small chip in from the fore-edge of the front wrapper, otherwise uncommonly very good to near fine. A lovely gathering of various printed items associated with Bruno's Garrett, as well as uncommon items relating to Charles Edison's "Little Thimble Theatre," of which Bruno served as manager. Edison, son the inventor, operated the 100-seat theatre with Bruno between 1915 and 1916. There they hosted productions of the works of George Bernard Shaw and August Strindberg, and Charles contributed verse to Bruno's WEEKLY under the pseudonym "Tom Sleeper." Edison eventually left his Greenwich Village activities behind to pursue a path that eventually led to service as Secretary of the Navy and Governor of New Jersey. Also present are important and uncommon items promoting Clare Tice and Bernhardt Wall. The contents of the volume are:

a) BRUNO'S GARRET FIRST EXHIBIT OF DRAWINGS AND PAINTINGS ... BY CLARA TICE. May 1915. 18pp, with illustrations. A very early and important exhibition of work by the proto- Dadaist and illustrator.

c) GUIDO BRUNO IN HIS GARRET ON WASHINGTON SQUARE BEING A LIST OF PUBLICATIONS. Pictorial wrapper. 8pp. A catalogue of his publications. The entry for Kreymborg's EDNA is effaced with pencil and noted as 'censored.' Small chip and closed tear at fore-edge.

d) another copy of item c, without chip and tear, and without the penciling over of the listing of EDNA ....

h) ETCHINGS, DRAWINGS AND WATER COLORS BY BERNHARDT WALL [caption title]. [4]pp. leaflet, with text on top panel only. An announcement and invitation to the exhibit beginning 27 May (see item b above).

k) CHARLES EDISON REQUESTS YOUR THE HONOR OF YOUR PRESENCE.... [caption title]. Single sheet invitation to a recital, 9 August, headed by a pictorial vignette by Tice.

l) ETCHINGS, DRAWINGS AND WATER COLORS BY BERNHARDT WALL SHOWING THE PORTRAITS OF WELL- KNOWN MEN [caption title]. [4]pp leaflet, with text on outer panel only. Invitation to an exhibition 27 May - 6 June.

m) CHARLES EDISON REQUESTS THE HONOR OF YOUR PRESENCE .... [4]pp octavo leaflet printed on Japanese paper, with pictorial vignette by Clara Tice. Text on top panel only. An invitation to a reception at Edison's studio, which will include nursery rhymes by Robert L. Stevenson set to music.

n) BRUNO CHAPBOOKS VOLUME 1. 1915. [4]pp. leaflet with substantial text by Bruno. A prospectus for subscribers to the first volume. A bit dust smudged.

While a few of the constituent items are not uncommon, the items re: Charles Edison are highly uncommon, and the Tice exhibition catalogue is aggressively sought after. (Inventory #: WRCLIT86288)
$1,250.00 add to cart or Buy Direct from
William Reese Co. - Literature
Share this item