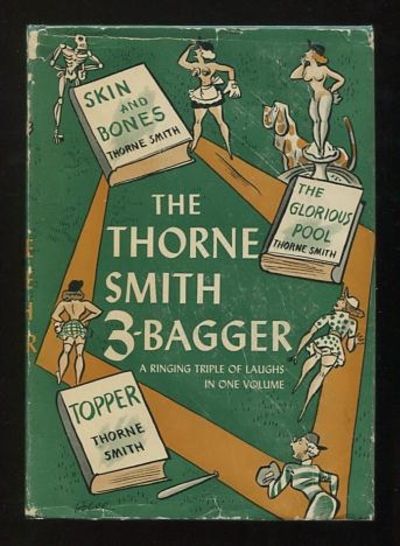 by Smith, Thorne
Garden City NY: Doubleday, Doran and Company, Inc.. Near Fine in Very Good dj. 1943. First Edition. Hardcover. [nice copy with only minor shelfwear, previous owner's initials in ink at upper left corner of front endpaper; the jacket shows some wear at edges and extremities, with a few tiny edge-nicks, small tears at a few corners, a bit of creasing along the top and bottom edges of the front panel, and some light diagonal scuff lines on the front panel (quite presentable in new mylar despite these various depredations)]. (line drawings) Omnibus volume collecting three of the popular comic novelist's books, published originally in (respectively) 1934, 1933 and 1926, including the original Herbert Roese illustrations. Although Smith himself had died in 1934 (the first two books in this volume were actually the last two to be published in his lifetime), his work continued to be reprinted and widely read for some years -- due in large measure, no doubt, to the popular movies based on several (most notably the "Topper" films). This was the third and last such collection to be published -- basically the publisher ran out of books to reprint (at least Smith's popular ones) -- and seems to be the scarcest, perhaps due to a reduced print run during the war. All three of the TS omnibi were subsequently issued in cheap-ass Sun Dial Press editions, but the original Doubleday, Doran printings (especially in decent jackets) are considerably less common. ****NOTE that additional postage charges will be assessed for international shipping of this moderately heavy book; if this concerns you, please contact us for a shipping quote before placing your order.**** . (Inventory #: 27126)
$200.00 add to cart Available from ReadInk
Share this item
ReadInk
Offered by

Minutes of the Last Meeting

New York : The Viking Press , 1954
(click for more details about Minutes of the Last Meeting)
View all from this seller>