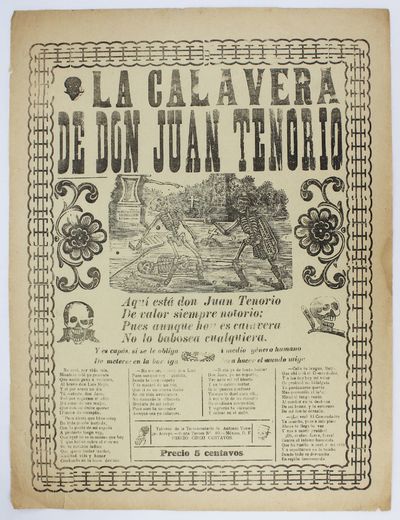 by [Posada, Jose Guadalupe]
Mexico City: Antonio Vanegas Arroyo, 1913. Very good.. Broadside, approximately 16 x 12 inches. A few small nicks at edges; short closed tear near upper left corner. Light toning and dust soiling. A classic and scarce Posada calavera broadside that relates the famous tale of Don Juan and his battle with death. The Mexican version of the story was crystalized in the 1844 drama Don Juan Tenorio by José Zorilla, which was often performed on the Day of the Dead, and whose conclusion involves a dramatic duel and cemetery scene depicted in the present illustration. "The broadside shows a graveyard in which two skeletons are fencing each other, while another lies on the ground dead, and a fourth peeks from behind a tombstone. There are two small skulls, a small bird creature, and a small angel by a tomb used as decoration" - Library of Congress. The text is a versification of the confrontation between Don Juan and his rival, headlined by the derisive quip, "Aquí está don Juan Tenorio / De valor siempre notorio; / Pues aunque hoy es calavera / No lo babosea cualquiera." An essential example of the genre. (Inventory #: 2411)
$1,500.00 add to cart Available from
McBride Rare Books
Share this item