Action of the Legislature of the State of Texas, in Reference to the Charge of Defalcation Against Commodore E.W. Moore, and the Construction Put Upon the "Annexation Resolutions," by the Government of the United States 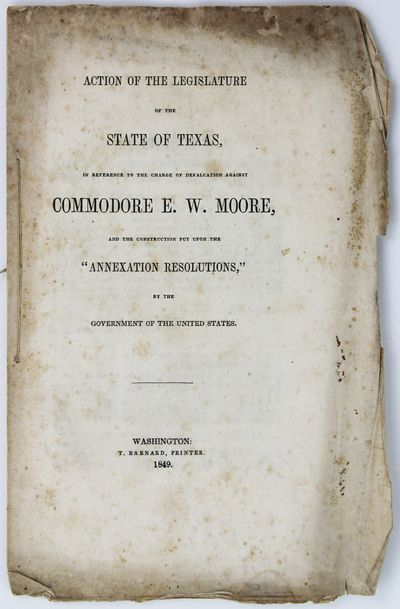 by [Texas]. [Moore, E.W.]
Washington DC: T. Barnard, 1849. Very good.. 14pp. Gathered signatures, stitched. Moderate edge wear and foxing, first leaf a bit darkened along edges. A scarce work relating to continuing efforts by Commodore Edwin Ward Moore to recover vast sums of money he personally assumed while serving as the commander of the Texas Navy in 1840. At that time, Moore was tasked by President Sam Houston to blockade the Mexican coast, but without proper funding for supplies. Desperate to continue his mission, Moore took his ship up the Tabasco River where he encountered Yucatan rebels who were about to surrender to Santa Anna. Moore agreed to help the Yucatecans fight Santa Anna for a payment of $25,000. The plan worked. The Yucatecans outmaneuvered Santa Anna and Moore was able to continue his mission, but at a further cost of his reputation. President Houston was furious that Moore defied orders and assisted the Yucatan rebels. President Houston accused Moore of a host of serious charges, including willful neglect of duty, misapplication of funds, embezzlement of public property, fraud, disobedience, contempt, treason, and murder. Moore himself was equally angered and embittered by the situation, and spent the next several years attempting to recoup the funds he supplied to the Texas Navy. The animus between the two men lasted the remainder of their lives.

The present work relates to Moore's efforts to secure repayment of debts incurred as commander of the Texas Navy and owed to him by the Republic of Texas, now the state of Texas, in 1849. The pamphlet prints letters, resolutions, and reports dated between 1846 and 1848, detailing Moore's expenditures during his early naval activities, and including various instructions by the Texas government to settle accounts with Moore. Ultimately, in 1857, the state of Texas and the U.S. Congress settled with Moore for $44,655, which amounted to five years' pay.

Moore initially defended his Yucatan activities in his To the People of Texas in 1843. In his entry for that work, Raines refers to Commodore Moore as "associated with all that is glorious in the achievements of the Texas Navy." The present work is a detailed and important distillation of Moore's argument for reimbursement, centered around what has now become known as the Tabasco Incident.