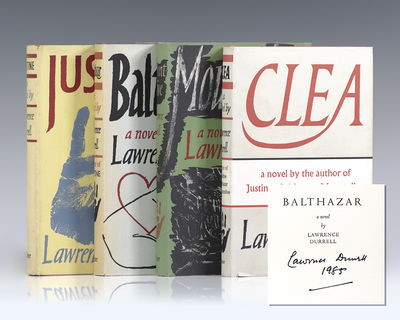 by Durrell, Lawrence
London: Faber and Faber, 1960-1961. First editions of each of the novels comprising the author's acclaimed Alexandria Quartet. Octavo, original cloth, 4 volumes. Justine is a presentation copy, inscribed by the author on the half-title page, "Signed for Christopher hope he finds her good company! Lawrence Durrell 1985." Balthazar, Mountolive, Clea are each signed on the title page, "Lawrence Durrell 1985." Each book is near fine to fine in near fine to fine dust jackets. A very sharp set, rare and desirable signed. Lawrence Durrell's masterpiece The Alexandria Quartet are four novels set in Alexandria, Egypt during the 1940s. The first of his four novels Justine "demands comparison with the best books of our century." Balthazar continues Durrell’s epic series with "a spontaneous, resourceful new beauty" and, in the third novel Mountolive, Durrell again creates a "work of splendid craft and troubling veracity." The tetralogy’s final novel Clea completes Durrell’s stated design of modeling "the series on ‘the relativity proposition’ in physics"—altogether achieving "a spontaneous, resourceful new beauty" (New York Times). Named by Modern Library as one of the 100 greatest novels of the twentieth century. (Inventory #: 129876)
$12,500.00 add to cart or Buy Direct from
Raptis Rare Books
Share this item