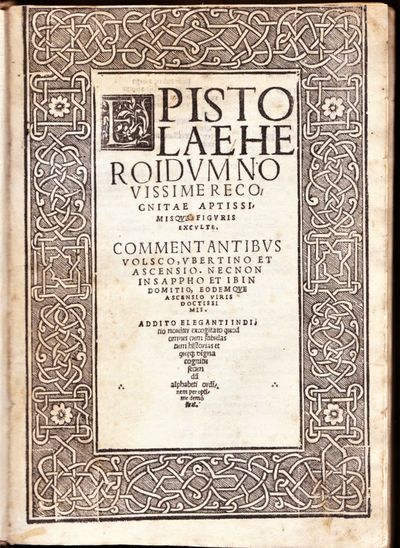 Alessandro Paganini and his father were among the scholar-printers active in the tidal wave of publishing in Venice in the last two decades of the 1400s and the early 1500s (alongside Aldus, Jenson, the Giunti, and all the rest). Around 1520, the Paganini family relocated the operation to a paper mill town on Lake Garda, Toscolano, in order to be near the paper supply. While all of their contemporaries published classics either in Aldus's italic type or in some version of Jenson's Roman, the Paganini's designed their own distinctive and quite legible hybrid, unique in Renaissance printing. Father and son had produced several pocket-sized editions of Ovid (their favorite poet), but in the mid-1520s Alessandro decided to produce a series in quarto, decorated with woodcuts. Of these, the Heroides was the most popular. It went through three settings (1525, 1533, and 1538--the last being the final book out of the Paganini shop). All Paganini Press editions are uncommon and desirable. (Inventory #: 6531)
$3,500.00 add to cart Available from
Rare Book Studio
Share this item
Rodger Friedman Rare Book Studio
Offered by