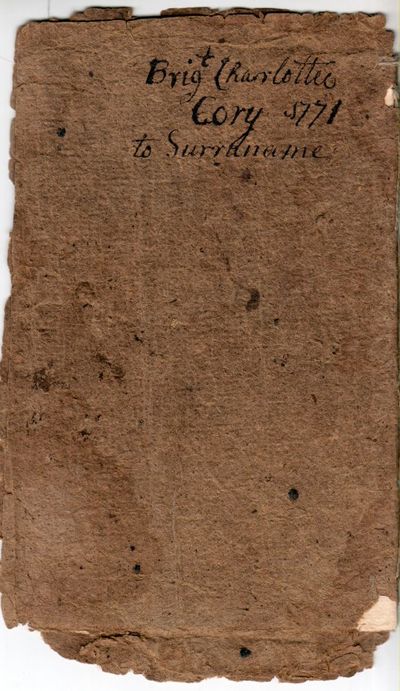 This little book documents articles sold from ship's stores, as well as loans and payments made, in the course of a voyage of the ship Royal Charlotte from Suriname to Newport, RI, with a stop at St. Eustatius. The Royal Charlotte was a known slave ship, and William Vernon, mentioned several times in these entries, was prominent in the American slave trade. This voyage of December 1771 - January 1772, was the third leg of a triangle trade voyage - carrying sugar from Suriname to Newport in exchange for slaves imported from West Africa. Named sailors are (?) Munro, Humph. Cochran, John Scott, John Turner, Lemuel Parmer, Aldrich Wiley, and John Foot. "Cory" is named several times as captain. Transactions include payments for rum, clothing, and "hospital money" subtracted from payment due to each sailor, and made in Newport, where the tallies in this book were completed. Stab sewn. In plain paper wrappers on which is written "Brgt Charlotte / Cory 1771 / to Surraname." (Inventory #: 43764)
$1,500.00 add to cart Available from
Ten Pound Island Book Co.
Share this item

The Rise of the Book-Plate.

New York : A. Wessels Company , 1901
(click for more details about The Rise of the Book-Plate.)

Boston : Houghton Mifflin Company , 1930
(click for more details about Background with Figures.)
View all from this seller>