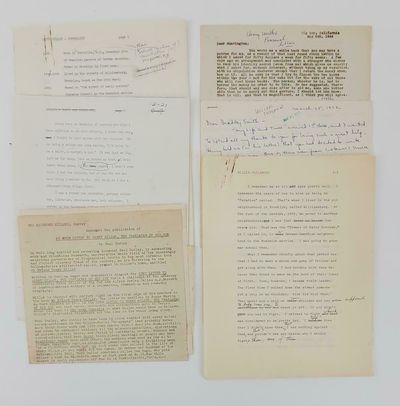 by Miller, Henry
Description: A lot of fifteen remarkable documents from the career of one of 20th century America's consummate artists.


Item #1: A typed letter signed by Henry Miller to his one-time censor, and later lifelong friend, Huntington Cairns. The letter addresses various individuals who were helping Miller financially at this time, observations on the plight of artists in American life, as well as the continuing financial assistance Miller was providing Anais Nin. Regarding Nin, Miller writes "I could never repay what I owe her - not in cash, certainly." Three typed pages on 8.5" x 11" carbon sheets. Roughly 1,750 words in length with docket and correction in Miller's hand. In very good condition. Holes from staple faintly visible in top left of pages, 1/8th-inch tear appears in the same location on pages two and three, and there is a faint crease at the bottom right corners of pages one and two.


Item #2: Two mimeographed typed press releases for a seemingly never-released work entitled An Open Letter to Henry Miller, Charlatan of Big Sur, which appears to have been written in response to Alfred Perles' 1955 My Friend Henry Miller. The book was to portray Miller as a fraud and plagiarizer. [1965?], Surrey. Four pages in red and black ink on 8" x 13" sheets. The first typescript, announcing "the publication of the 2nd/ENLARGED edition", has several holographic corrections in blue ink, and light-age-toning. The second, presumably announcing the 'first' edition, is free of marks but has more substantial age-toning. Both have been folded for mailing and are slightly creased.


Item #3: Miller's working typescript for a memoir, containing unpublished material. These documents appear to have been written in late 1970 or early 1971. It is comprised of three sections - "Chronology", "Childhood" and "Youth and Early Jobs" - and contains Miller's own extensive holograph emendations in black ink. An edited (partially redacted) version of this chronology appears in "Life and Times", but the other contents appear to remain unpublished.


Typescript. Quarto. [17][21][12]. All in very good condition. The first and last pages of all three sections show traces of rust from a paperclip, and occasional light creasing. The first page of "Childhood" has two very small chips on right edge.


Item #6: A handwritten letter from Bradley Smith, publisher of Miller's My Life and Times, to book designer Nicole de Jurenev. The letter is dated "Jan 31 - 1971" and includes specifics for the layout of the book (released later that year). ALS. January 31, 1971. Four handwritten pages on 8.5" x 11" loose-leaf lined paper. Very good condition. Several faint creases, slight chipping on first and fourth pages, and moderate even age-toning throughout.


Item #7: A typed letter signed by Miller addressed to Jack Kessie, managing editor at Playboy magazine. The letter is dated "Jan. 12, 1972". Miller expresses a great deal of interest in an interview with Germaine Greer that appeared in the January, 1972 issue. One page, type-written on 8.5" x 11" carbon paper. A holograph note ("copy") written by Miller in black ink appears at the top left corner, as does another holograph note in blue ink ("Miller / Personal") in the top-center. In good condition, with creases at top-left and bottom-right corners, and a tear at the top right corner. Initialled by Miller in black ink in the signature line.


Item #8: The actor Kenneth Du Main wrote to Bradley Smith to praise the book's publication, and details his significant collection of "Millerania" - what he calls his "14 feet of Miller". The letter is dated "March 25, 1972". Three pages on three 8.5" x 11" unruled copy paper. Handwritten in blue ink. Very good condition. Folded for mailing, with Du Main's address stamp beneath his signature on the final page.


Item #11: A publisher's prospectus for the 1972 publication of Miller's Reflections on the Death of Mishima. A Holograph note by Miller in black ink above the text on reverse reads: "Every time I read this essay / I like it more and more." Very good condition. Printed on a single 5.5" x 7.5" card with woodblock print on recto and text on the reverse. Folded twice for mailing.


Item #12: A typed letter signed by William Targ, editor-in-chief of G.P. Putnam's Sons, to Henry Miller dated "6/15/73". Targ writes to Miller regarding several books on erotic art previously requested by Miller, and about potential (though, doubtful) interest in releasing Miller and Bradley Smith's planned book on the subject. He goes on to praise Miller's My Life and Times, and asks if he can forward his copy to be signed by Miller. Single page on 7" x 10.5" paper bearing the G. P. Putnam's Sons letterhead. Very good conditions. Includes three holograph emendations by Targ in red ink, two in black ink (by Miller?), and Targ's signature "Bill" in blue ink on the signature line. Folded for mailing, with a faint semi-vertical crease along the left edge.


Item #14: A typed letter to Henry Miller from a fan, "Nereida Boyd." The letter is dated "November 2, 1973". Ms. Boyd wrote a lively and loving letter to Miller to thank him for bringing "a breath of fresh air in literature." Miller was clearly touched by this gesture, as he saved the letter - "Miller. / file" is pencilled in Miller's hand at top-center. Single page typed on copy paper. Very good condition. Folded twice for mail.


Items #15: A typed letter signed by Henry Miller to the president and editor-in-chief of Parisian publisher Editions Stock, Christian de Bartillat. The letter is dated "March 16, 1974" and concerns Miller's work-in-progress, The Book of Friends (ultimately published in 1976 as Henry Miller's Book of Friends: A Tribute to Friends of Long Ago). Two pages on two stapled 8.5" x 11" carbon sheets. Very good condition. A holograph emendation by Miller in purple ink appears on page two, as well as "(de Bartillat) / Editions Stock, Paris" in purple ink near the salutation line, and the note "file Miller - Personal" appears in black ink at the top-center of the first page.

Oxford : Oxford University Press , 1965
(click for more details about CATULLUS: A COMMENTARY)
View all from this seller>