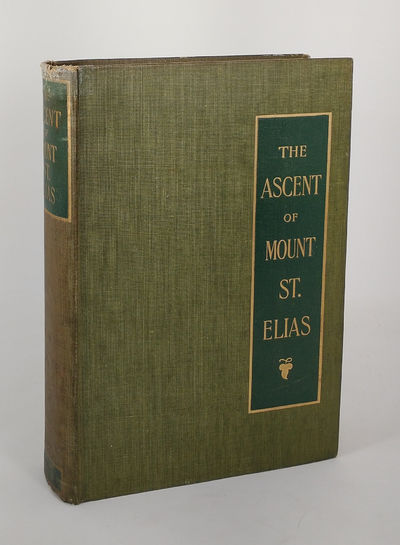 by Filippi, Filippo de; Sella, Vittorio (Photographer)
New York: Frederick Stokes. Hardcover. Good. First American edition, undated, but Neate (F24) suggests of date of 1899, which would precede the English edition. 10.75" x 7.5", pp xvi, 240, [1] pp.; with 34 photogravure plates (most after photographs by Sella) and additional illustrations from photographs throughout, 4 folding panoramas, and 2 folding color maps. In original green cloth with titles in gilt on darker green panels. This book is heavy and was bound with a glue that has tended to degrade, thus it is often found re-bound or re-cased. Our copy is fully original, but delicate, with cracks starting at various points in the text block, mild to moderate scattered foxing throughout, and some residue at the head of the spine where it appears a piece of library tape was applied and later removed. Public library bookplate on front pastedown, accession number on verso of title page, otherwise unmarked. A well written and beautifully illustrated account of the first successful ascent (on July 31, 1897) of 18,000-foot Mount Saint Elias, which straddles the U.S./Canadian border and is the second highest mountain in both countries. As Neate explains, this was the "first of three very important and successful expeditions masterminded by the Duke of the Abruzzi. De Filippi was an Italian surgeon, scholar and mountain traveller and the official recorder of the Duke's expeditions." The Duke's other two climbing expeditions were to K2 in the Himalayas and Ruwenzori in central Africa. (Inventory #: 21991)
$475.00 add to cart or Buy Direct from Walkabout Books
Share this item