The Carmina of Caius Valerius Catullus. 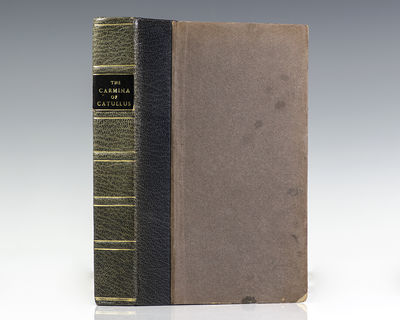 by Catullus, Gaius Valerius. [Translated by Sir Richard Francis Burton]
New York: Privately Printed for Subscribers Only, 1928. Gaius Valerius Catullus was a Latin poet of the late Roman Republic who wrote chiefly in the neoteric style of poetry, focusing on personal life rather than classical heroes. His surviving works are still read widely and continue to influence poetry and other forms of art. Catullus's poems were widely appreciated by contemporary poets, significantly influencing Ovid and Virgil, among others. After his rediscovery in the Late Middle Ages, Catullus again found admirers such as Petrarca. The explicit sexual imagery which he uses in some of his poems has shocked many readers. Yet, at many instruction levels, Catullus is considered a resource for teachers of Latin. (Inventory #: 128056)
$300.00 add to cart or Buy Direct from
Raptis Rare Books
Share this item

Maldon : The Free Age Press , 1900
(click for more details about Patriotism and Government.)
View all from this seller>