Epidemic Cerebro-Spinal Meningitis and its relation to Other Forms of Meningitis. A Report of the State Board of Health of Massachusetts 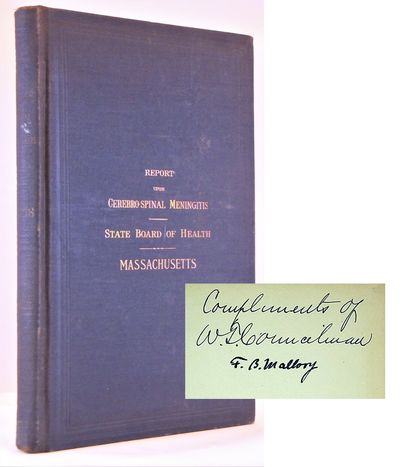 REPORT OF EPIDEMIC MENINGITIS IN BOSTON, 1897 BY LEADING PATHOLOGISTS COUNCILMAN, MALLORY AND WRIGHT, WITH FOLDING MAP & COLOR PLATES--SIGNED BY COUNCILMAN AND MALLORY.

WILLIAM THOMAS COUNCILMAN (1854-1933) was an American pathologist, serving as the first pathologist-in-chief at Peter Bent Brigham Hospital. Dr. Councilman had arrived in Harvard Medical School earlier in 1892 and was an expert in the study of amebiasis, diphtheria, smallpox, and yellow fever. His vivid morphologic description of changes seen in the liver of yellow fever lives on today as "Councilman body". He published a number of important works on cerebrospinal meningitis with Wright and Mallory.

FRANK BURR MALLORY (1862-1941) was an American pathologist at the Boston City Hospital and Professor of Pathology at Harvard Medical School, after whom the Mallory body is named. His contributions in the field of pathology included improving techniques and standardization of tissue staining; his book, written with James Homer Wright, was the standard textbook in this field. He also studied the function of histiocytes, he confirmed that the whooping cough bacillus discovered by Jules Bordet was the causative agent, and he worked on improvements in classification of tumors, particularly meningiomas, and cirrhosis of the liver. He was editor of the Journal of Medical Research from 1923, and then founding editor of the American Journal of Pathology from 1925 to 1940. (Inventory #: 1164)
$300.00 add to cart Available from
BioMed Rare Books
Share this item