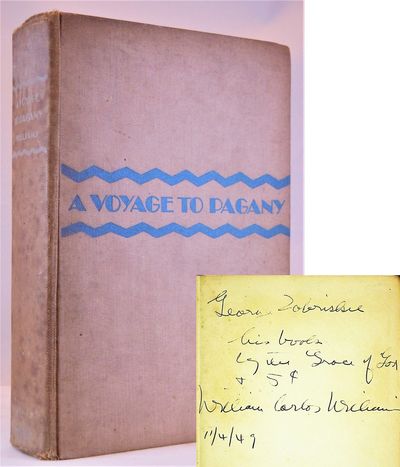 SIGNED COPY OF WILLIAM CARLOS WILLIAMS' FIRST NOVEL INSCRIBED TO GEORGE ZABRISKIE, A YOUNG POET together with ON THE BOARDS BY ZABRISKIE, SIGNED BY HIM.

WILLIAM CARLOS WILLIAMS (1883 – 1963) was an American poet, writer, and physician closely associated with modernism and imagism. His father was born in England but raised from the age of 5 in the Dominican Republic; his mother was from Mayagüez, Puerto Rico, and had French extraction. The Caribbean culture of the family home had an important influence on Williams. Williams received his primary and secondary education in Rutherford, New Jersey until 1897 when he was sent for two years to a school near Geneva and to the Lycée Condorcet in Paris. He was admitted in 1902 to the medical school of the University of Pennsylvania, from which he graduated in 1906. Upon leaving Penn, Williams did internships at both French Hospital and Child's Hospital in New York, then went to Leipzig for advanced study of pediatrics. He returned to Rutherford where he practiced medicine by day and wrote at night. In 1923, Williams published Spring and All, one of his seminal books of poetry, which contained the classic poems "By the road to the contagious hospital", "The Red Wheelbarrow" and "To Elsie". Five years later, he Published his first novel, A Voyage to Pagany, offered here. In his modernist epic collage of place titled Paterson (published between 1946 and 1958), an account of the history, people, and essence of Paterson, New Jersey, Williams wrote his own modern epic poem, focusing on "the local" on a wider scale than he had previously attempted. He also examined the role of the poet in American society and famously summarized his poetic method in the phrase "No ideas but in things" (found in his poem "A Sort of a Song" and repeated again and again in Paterson). In his later years, Williams mentored and influenced many younger poets. He had a significant influence on many of the American literary movements of the 1950s, including the Beat movement, the San Francisco Renaissance, the Black Mountain school, and the New York School.

GEORGE ZABRISKIE, born in Belleville, New Jersey in 1918 won a Guggenheim Fellowship in 1941/42. His poem On the Boards (offered here) was published 2 years before Williams inscribed Voyage to Pagany to him. The poem was privately printed as a pamphlet, 8 pages staple-bound with paper covers illustrated with woodcuts by his wife Elizabeth, signed by the author on verso of front cover. Fine. (Inventory #: 1156)
$500.00 add to cart Available from
BioMed Rare Books
Share this item