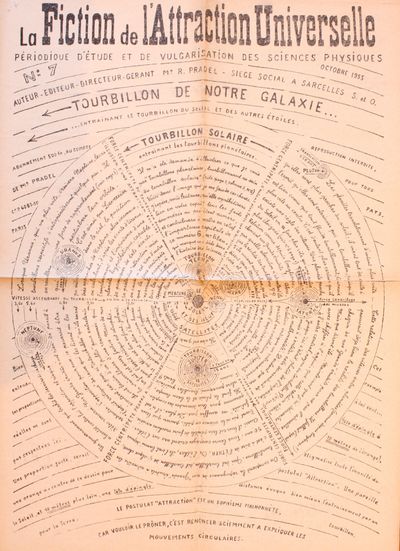 by Pradel, René
Paris: self-published, January 1954-August 1957. Tabloid newsprint, measuring 45 x 32 cm; [4] pp. per issue. Old vertical and horizontal fold; else very good. A scarce complete run in 11 issues of the scientific and literary periodical, issued by René Pradel as a place to record his revolutionary scientific hypotheses, with topics including the "fiction" of gravitational force, the gyroscope and Foucault's pendulum, gravity's relationship with nature, the phenomenon of the tippe top, vortices, and retrograde rotation. Illustrated throughout with diagrams and sketches, including a number of striking full-page drawings.

Pradel was originally a watchmaker from the town of Sarcelles, who wanted to abolish Newton's idea of gravitational force and convince the world of his new ideas. The ideas presented here are often radical and sometimes at odds with accepted scientific theory.

Rare; as of October 2021, KVK, OCLC locate a single holding at Bibliothèque nationale de France, and just one in North America. (Inventory #: 51681)
$4,500.00 add to cart or Buy Direct from
Bernett Penka Rare Books
Share this item