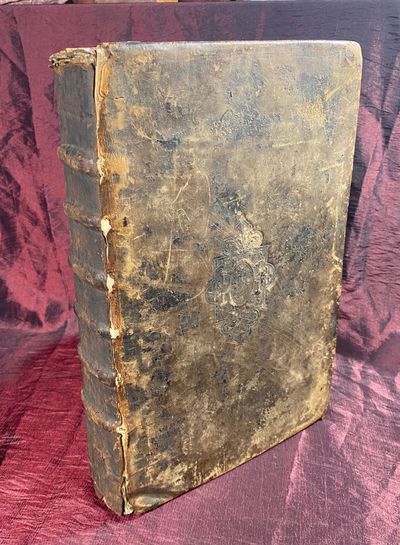 by Savile, Sir Henry
London: G. Bishop, R. Nuberie & R. Barker, 1596. First Edition. Very good. Folio (311 x 196 mm). [2] 520, [30] ff. COLLATION: [para]2 A-R6 (P3 misprinted as "Oiii"), S8, T-Z6, 2A-2D6, 2E4, 2F-4R6, 4S4, *4, **4, ***6, A-H2, COMPLETE. Four titles with fine woodcut borders dated "1574." First gatherings with staining on upper gutter margin (not egregious) Fols. O1 and (conjugate leaf) O6 lightly browned; at end fols. A1-2 browned. Paper flaw in fol. V2 outer margin; paper flaw in fol. 2V3 resulting in 1" tear to fore-margin; paper flaw to fol. 4I5 resulting in a 2" tear affecting five lines of text; fols. 4O2 and (conjugate leaf) 4O5 browned. Some annotations in the margins, particularly on fols. 3v and 4r (see below) and manicula. Contemporary English calf (quite worn, particularly along joints, for which SEE IMAGES), sewn on six alum-tawed split straps laced into thick paste-paper boards, parchment guards at front and back, covers with large ornamental centerpiece stamped in blind (likewise quite worn, but similar to Pearson, Oxford Bindings, p. 109, no. xxxii, who advises that "the design is a very common one and many variants were used in London and elsewhere); front board loosening but quite attached. A very good copy, the text generally clean, crisp, and strong, completely unsophisticated. First Edition of Savile's very important collection of English chronicles, extending to 1485, into which are incorporated the FIRST PRINTINGS of the chronicles of Aethelweard (d. 998?), Henry of Huntingdon (1084?-1155), Ingulf (1030?-1109), Roger of Hoveden (d. 1201?), and three works of William of Malmesbury (ca. 1090-1143), namely the "De gestis pontificum," "De gestis regum," and the "Historia novella." Savile's 1596 edition of Aethelweard's chronicle is of the greatest significance, because it is the only surviving witness to this key text: the unique manuscript of the text (Cotton MS Otho A X) was almost completely destroyed in the fire of the Bibliotheca Cottoniana in 1731 (and again in 1865 in a fire in the bindery of the British Museum); therefore all subsequent scholarship continues to rely on Sevile's erudition and vision. Henry Savile (1549-1622), one of the great scholars of the Elizabethan era, belongs in the pantheon of the English antiquarians whose writings he collected in the present volume.

Our copy has some interesting annotations, including one on fol. 34r (in William of Malmsbury's chronicle) clarifying that Calne is located in Wiltshire; this is an extraordinary reference, considering the number of townships that are mentioned in the text. Was the annotator located in the proximity of Calne? This same annotator has written a very intriguing historical note on the first blank:

"An. dom. 1610, [...] Januar. 1, 2, 3, such a mighty flud and ravage of waters with most dreadful storms and tempests and lightning as seldom have been heard of, so that [...] ye unspeakable mercys of God that gots in streets and houses by windes and waters We were not ruin'd and consumde. Great are his mercys."

Above this is, in a near-contemporary hand, is a MS transcription of a portion of Savile's text, namely an epigram on the death of Richard I (i.e. death of Hector in the Iliad). In the present edition it is on fol. 450r; the grim couplet reads: "Longa manus morti; mors fortior Hectore forti: Expugnant homines oppida, mors homines."