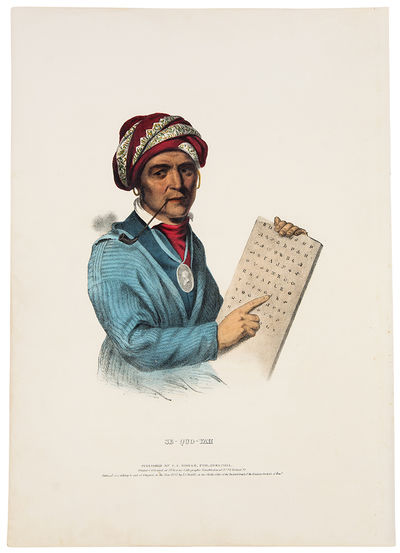 by MCKENNEY, Thomas L. (1785-1859) and James HALL (1793-1868)
Philadelphia: E.C. Biddle, 1837. Hand-coloured lithograph by Childs & Inman after Charles Bird King's portrait of 1828. In excellent condition. Very early impression. A fine image from McKenney and Hall's 'Indian Tribes of North America': `One of the most important [works] ever published on the American Indians' (Field),` a landmark in American culture' (Horan) and an invaluable contemporary record of a vanished way of life.

Sequoyah is one of the most famous men of American Indian history. Known locally as George Guess, he was the son of a white farmer named Gist and a Cherokee mother, who brought him up closer to the Cherokees than to the whites. Sequoyah was from the start an inventive boy with an inquisitive mind. After achieving some success in agriculture, Sequoyah learned to be a silversmith, eventually excelling at that craft. But his greatest achievement was the invention of a Cherokee alphabet. This he taught to his people as they were moved westward, first in Alabama and then Arkansas and later Oklahoma. Using his alphabet a Cherokee newspaper was published as well as a Cherokee Bible. Sequoyah visited Washington in 1828, at which time McKenney arranged to have his portrait painted. He spent his last years in California near San Fernando. McKenney and Hall's 'Indian Tribes of North America' has long been renowned for its faithful portraits of Native Americans. The portraits are largely based on paintings by the artist Charles Bird King, who was employed by the War Department to paint the Indian delegates visiting Washington D.C., forming the basis of the War Department's Indian Gallery. Most of King's original paintings were subsequently destroyed in a fire at the Smithsonian, and their appearance in McKenney and Hall's magnificent work is thus our only record of the likenesses of many of the most prominent Indian leaders of the nineteenth century. Numbered among King's sitters were Sequoyah, Red Jacket, Major Ridge, Cornplanter, and Osceola. After six years as Superintendent of Indian Trade, Thomas McKenney had become concerned for the survival of the Western tribes. He had observed unscrupulous individuals taking advantage of the Native Americans for profit, and his vocal warnings about their future prompted his appointment by President Monroe to the Office of Indian Affairs. As first director, McKenney was to improve the administration of Indian programs in various government offices. His first trip was during the summer of 1826 to the Lake Superior area for a treaty with the Chippewa, opening mineral rights on their land. In 1827, he journeyed west again for a treaty with the Chippewa, Menominee , and Winebago in the present state of Michigan. His journeys provided an unparalleled opportunity to become acquainted with Native American tribes. When President Jackson dismissed him from his government post in 1830, McKenney was able to turn more of his attention to his publishing project. Within a few years, he was joined by James Hall, a lawyer who had written extensively about the west. McKenney and Hall saw their work as a way of preserving an accurate visual record of a rapidly disappearing culture. (Gilreath).

Cave-In-Rock. View on the Ohio

Paris, Coblenz and London 1842
(click for more details about Cave-In-Rock. View on the Ohio)

Philadelphia : E. C. Biddle , 1855
(click for more details about Pah-She-Pah-How)
View all from this seller>