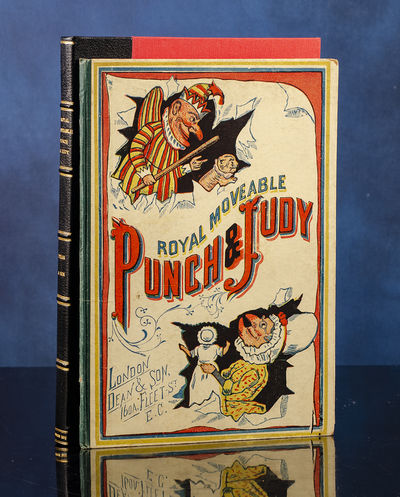 An astonishing copy with all eight movable plates fully functional and with no restoration to the moving parts.
The outer boards have just the minimal amount of wear to the extremities, the inner hinges expertly and almost invisibly strengthened.. An absolutely amazing survival.

It should be noted that OCLC only states the full 'Dean & Son, 160A Fleet St'. (as on our copy) on the one at the University of California. The other two copies aforementioned have only 'Dean & Son' with just 'London' as the address.

"The first true movable books published in any large quantity were those produced by Dean & Son, a publishing firm founded in London before 1800. By the 1860s the company claimed to be the 'originator of childrens' movable books in which characters can be made to move and act in accordance with the incidents described in each story.' From the mid-19th century Dean turned its attention to the production of movable books and between the 1860s and 1900 they produced about fifty titles" (Montanaro, A Concise History of Pop-Up and Movable Books).

"Dean and Son was the first publisher to produce movable books on a large scale. Thomas Dean, who founded the firm sometime before 1800, was one of the first publishers to take full advantage of the new printing process, lithography, which was invented in Germany in 1798. His business was devoted exclusively to making and selling novelty books, or 'toy' books, a term publishers began using in the early nineteenth century. His son George became a partner in 1847, and their toy books took over the market from the 1840s to the 1880s.

"Dean opened studios in London where teams of artists worked to design and craft all kinds of new and complex movables. Around 1856, Dean released a series of fairy tales and adventure stories under the title New Scenic Books. The scenes in the books were crafted in a "peep show" style. Each was illustrated on at least three cut-out sections. The sections were placed one behind another and attached by a ribbon running through them. This way, they could stay together and be folded flat as flaps, face down against a page. When a readers lifted a flap, a three-dimensional scene would actually pop-up!  A later, but good example of this technique is McLoughlin Brothers' The Lions' Den (ca. 1880), which is held together by a piece of board across the top instead a a ribbon.

"The books in new scenic series are probably the first that today's readers would consider pop-up books, although the term "pop-up" was yet to be used to describe such books. 'Movable' or 'toy book' was usually the choice for description. In 1860, Dean actually claimed to be the 'originator' of movable books.

"During the 1860s, Dean can be credited with inventing another first: the use of a mechanism that moved or was animated by pulling a tab. Dean advertised the new mechanisms as 'living pictures.' The Royal Punch & Judy is one of these early publications with tabs, which are located on the bottom of each page. In it, Punch and Judy are animated in their miniature theatre and act out all the violence and abuse that a Victorian audience would have expected from the couple" (University of North Texas, A Brief History of Early Movable Books).  . (Inventory #: 05215)
$9,500.00 add to cart or Buy Direct from
David Brass Rare Books
Share this item