HAND-BOOK TO KANSAS TERRITORY AND THE ROCKY MOUNTAINS' GOLD REGION; ACCOMPANIED BY RELIABLE MAPS AND A PRELIMINARY TREATISE ON THE PRE-EMPTION LAWS OF THE UNITED STATES 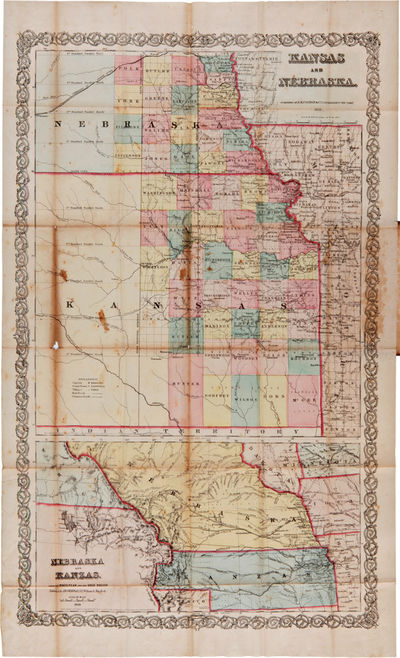 by Redpath, James, and Richard J. Hinton
New York: J.H. Colton, 1859.. 177pp. plus three maps on two folding sheets. 6pp. of advertisements. 16mo. Publisher's brown cloth, stamped in gilt and blind. Text lightly tanned. Small separations at map cross-folds. Very good. In a red morocco box, gilt. A rare Colorado gold rush guide book with three important maps of the region. The text contains an account of the Kansas region, descriptions of the various routes, information on the gold discoveries in the Rockies, and advice on outfitting a trip to the gold fields. "Pre-emption" laws relate to land claims and are treated in an appendix. The first two maps, on one sheet and both outlined in color, are "Kansas and Nebraska" and "Nebraska and Kanzas. Showing Pikes Peak and the Gold Region." The third map is "Military Map of Parts of Kansas, Nebraska, and Dakota by Lieut. G.K. Warren from Explorations made by him in 1855-57." The second and third maps are particularly significant, showing Denver, Montana, and as far west as Salt Lake.

[PHOTOMONTAGE OF THE MEN WHO PASSED THE THIRTEENTH AMENDMENT, ABOLISHING SLAVERY]

by [Slavery]: [Powell, George May]

[New York : Powell and Co.] , 1865.
(click for more details about [PHOTOMONTAGE OF THE MEN WHO PASSED THE THIRTEENTH AMENDMENT, ABOLISHING SLAVERY])

THE NEGRO IN MISSISSIPPI HISTORY

Jackson, Ms. : Hedermen Brothers , 1950.
(click for more details about THE NEGRO IN MISSISSIPPI HISTORY)
View all from this seller>