CATLIN'S NORTH AMERICAN INDIAN PORTFOLIO. HUNTING SCENES AND AMUSEMENTS OF THE ROCKY MOUNTAINS AND PRAIRIES OF AMERICA. FROM DRAWINGS AND NOTES OF THE AUTHOR, MADE DURING EIGHT YEARS' TRAVEL AMONGST FORTY-EIGHT OF THE WILDEST AND MOST REMOTE TRIBES OF SAVAGES IN NORTH AMERICA 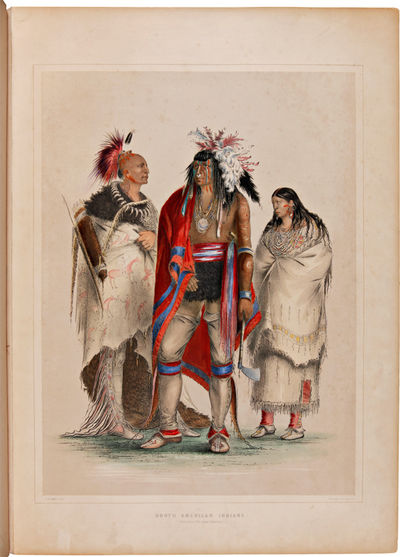 by Catlin, George
London: C. & J. Adlard for George Catlin, Egyptian Hall, 1844.. [pp.1-2] letterpress title (verso blank); [pp.3-4] "To the Reader"; pp.[5-]20 text. Twenty-five handcolored lithographic plates on thick paper, after Catlin, drawn on stone by Catlin (2) or McGahey (23), and printed by Day & Haghe. Folio. Publisher's brown moiré cloth boards, upper cover lettered in gilt, rebacked and retipped with dark brown calf. Endpapers and tissue guards renewed. Scattered minor soiling, else very good. First edition, handcolored issue. Catlin published the first two issues of CATLIN'S NORTH AMERICAN INDIAN PORTFOLIO... simultaneously in late November 1844. The first issue was handcolored and the second had tinted plates. Catlin originally envisaged publishing a series of linked but separate portfolios, each with its own theme: religious rites, dances, costumes, etc. Unfortunately, the first series was the only one that was ever published, and its production proved to be so taxing, both financially and physically, that Catlin sold both the publication and distribution rights to Henry Bohn.

CATLIN'S NORTH AMERICAN INDIAN PORTFOLIO contains the results of his years of painting, living with, and travelling amongst the Great Plains Indians. Catlin summarized the American Indians as "an honest, hospitable, faithful, brave, warlike, cruel, revengeful, relentless, - yet honourable, contemplative and religious being." In a famous passage from the preface of his NORTH AMERICAN INDIAN PORTFOLIO, Catlin describes how the sight of several tribal chiefs in Philadelphia led to his resolution to record their way of life: "the history and customs of such a people, preserved by pictorial illustrations, are themes worthy of the lifetime of one man, and nothing short of the loss of my life shall prevent me from visiting their country and becoming their historian." He saw no future for either their way of life or their very existence, and with these thoughts always at the back of his mind he worked, against time, setting himself a truly punishing schedule, to record what he saw. From 1832 to 1837 he spent the summer months sketching the tribes and then finished his pictures in oils during the winter. The record he left is unique, both in its breadth and in the sympathetic understanding that his images constantly demonstrate. A selection of the greatest of images from this record was published in CATLIN'S NORTH AMERICAN INDIAN PORTFOLIO in an effort to reach as wide an audience as possible. In addition to publishing the present work, Catlin spent from 1837 to 1852 touring the United States, England, France, and Holland with his collection of paintings and examples of Indian crafts, accompanied by representative members of the Indian tribes. A financial reverse in 1852 resulted in his losing the collection, but he spent his later years making several trips to South and Central America sketching the natives there.

The plates are as follows:

A highly important record of a "truly lofty and noble race....A numerous nation of human beings...three-fourths of whose country has fallen into the possession of civilized man...twelve million of whose bodies have fattened the soil in the mean time; who have fallen victims to whiskey, the small-pox, and the bayonet" (Catlin). ABBEY 653. FIELD 258. HOWES C243, "c." McCRACKEN 10. SABIN 11532. WAGNER-CAMP 105a:1. William S. Reese, "The Production of CATLIN'S NORTH AMERICAN INDIAN PORTFOLIO, 1844-1876," issue 2. REESE, BEST OF THE WEST 81. (Inventory #: WRCAM46479A)
$110,000.00 add to cart or Buy Direct from
William Reese Co. - Americana
Share this item