An Abridgment of Burn's Justice of the Peace and Parish Officer.. 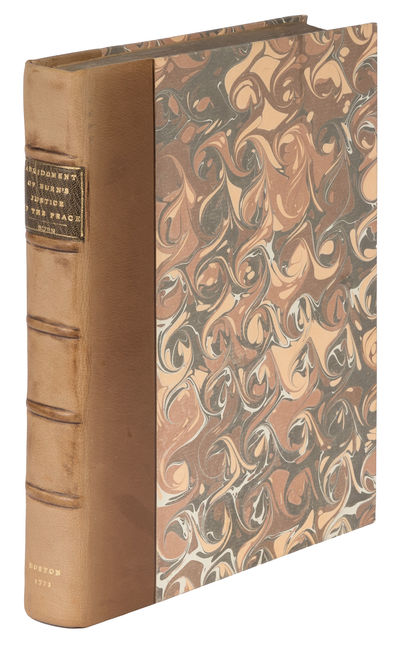 by Burn, Richard. Greenleaf, Joseph
1773. Boston: Printed for Joseph Greenleaf, 1773.. Boston: Printed for Joseph Greenleaf, 1773. The Only American Abridgment Before 1776 Burn, Richard [1709-1785]. Greenleaf, Joseph [1720-1810], Editor. An Abridgment of Burn's Justice of the Peace and Parish Officer. To Which is Added, An Appendix, Containing Some General Rules and Directions Necessary to be Known and Observed by All Justices of the Peace. Boston: Printed for, and sold by, Joseph Greenleaf, 1773. [viii], 386, [2] pp. Includes two-page publisher advertisement. Quarto (8-1/2" x 7"). Recent period-style quarter calf over marbled boards, raised bands and lettering piece to spine, existing endpapers retained, hinges mended. Light fading to sections of spine, early armorial bookplate (of John C. Williams) to front pastedown. Moderate toning, light foxing in a few places, light offsetting to endleaves, a few chips and tears to front endleaves, recent repair to lower inside corner of title page with no loss to text. A handsome copy. $1,250. * Only American edition and the only abridgement of a legal treatise printed in America before the Revolution. Richard Burn was an attorney and antiquarian who edited the ninth, tenth, and eleventh editions of Blackstone's Commentaries. His Justice of the Peace, and Parish Officer (1755) was perhaps his most important work. Holdsworth considered it to be one of the best treatments of the subject, an opinion shared by Burn's contemporaries, both in England and in the colonies. The "best proof that his book...was accepted as the leading text-book on that topic is the number of editions through which it passed.... It deserved its success. Burn carefully abridged the statutes, and stated the manner in which their clauses had been interpreted by the courts. His treatment of the criminal law was based upon a thorough study of the works of Coke, Hale, and Hawkins." Greenleaf explains the nature of his abridgement in the preface: "The London edition takes in the whole practice of England and Scotland, this renders it both bulky and dear. The circle of a justices business in those places is vastly extensive, and is founded chiefly on acts of the British parliament, which can never have any relation to this colony" [i]. Greenleaf also added an appendix of forms and general rules and directions for American courts. Holdsworth, A History of English Law XII:332-333. Cohen, Bibliography of Early American Law. (Inventory #: 72714)
$1,250.00 add to cart or Buy Direct from
Lawbook Exchange
Share this item

Commentaries on the Law of Marriage and Divorce, with the Evidence,..

1881
(click for more details about Commentaries on the Law of Marriage and Divorce, with the Evidence,..)

1735
(click for more details about Anno Regni Georgii II Regis, Nono, 1735)
View all from this seller>