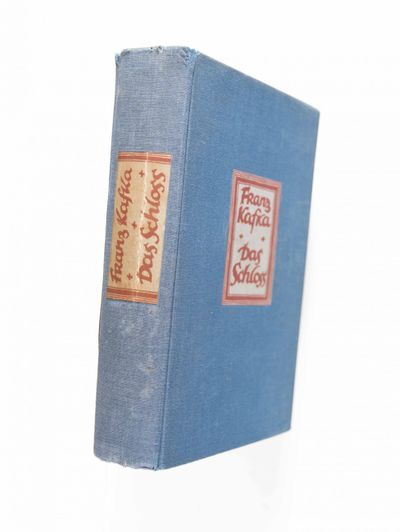 by Kafka, Franz; Max Brod (Epilog)
München: Kurt Wolf Verlag, 1926. First edition. Hardcover. Good+ condition. Octavo. (4)503 (1)pp. Original blue clothe with red lettering and ruling on paper label of cover and spine, protected by modern mylar. Kafka had begun writing this dark novel in early 1922, right after he had arrived at the mountain resort "Spindlermühle." It was unfinished when he passed away on June 3, 1924, though he did suggest to his friend Max Brod, that the protagonist "K" would die in the village at the end. It is among the Kafka novels published by Max Brod, who had been instructed by Kafka to destroy the manuscript after Kafka's death. Text in German. Binding with light wear along edges and lightly rubbed with spine lightly sunned. Label on spine with slight vertical crack down the middle. Lightly starting at pages 499 and 504. Block lightly age-toned. (Inventory #: 49120)
$950.00 add to cart or Buy Direct from
Eric Chaim Kline Bookseller
Share this item

New York : Amphoto , 1961
(click for more details about Perspective of Nudes)
View all from this seller>