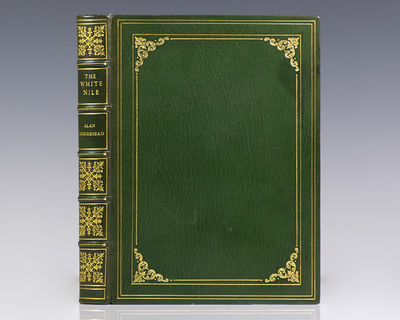 by Moorehead, Alan
London: Hamish Hamilton, 1971. Finely bound revised and illustrated edition of the author's first popular work on nineteenth-century exploration of the Nile. Quarto, bound in full crushed green morocco by Sangorski and Sutcliffe with gilt titles and tooling to the spine in six compartments within raised gilt bands, quadruple gilt ruling and fleuron cornerpieces to the front and rear panels, gilt turn-ins and inner dentelles, marbled endpapers, all edges giltm illustrated with colored maps and plates. In fine condition. A very fine presentation. In the first half of the 19th century, only a small handful of Westerners had ventured into the regions watered by the Nile River on its long journey from Lake Tana in Abyssinia to the Mediterranean -- lands that had been forgotten since Roman times, or had never been known at all. In The Blue Nile, Alan Moorehead continues the classic, thrilling narration of adventure he began in The White Nile, depicting this exotic place through the lives of four explores so daring they can be considered among the world's original adventures -- each acting and reacting in separate expeditions against a bewildering background of slavery and massacre, political upheaval, and all-out war. (Inventory #: 129398)
$1,250.00 add to cart or Buy Direct from
Raptis Rare Books
Share this item

Norwalk, CT : The Easton Press , 1990
(click for more details about Speaking My Mind.)
View all from this seller>