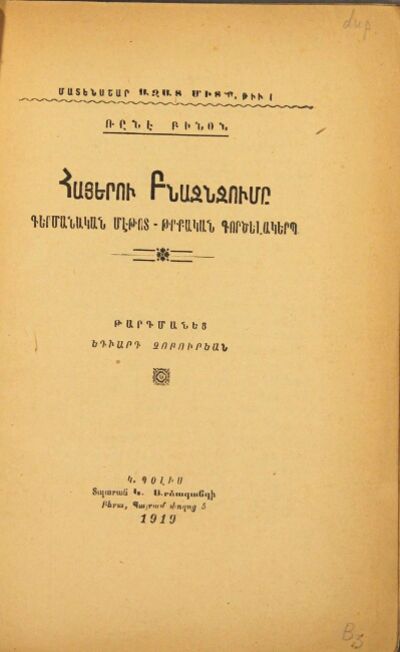 by Pinon, Rene [Edward Choburian, trans.]
K. Polis [Constantinople]: K. Artsagangi, 1919. 8vo, pp. 60, [2]; salmon wrappers; lower wrapper perished, paper toned, good. The final chapter, "Responsibilities," with extensive manuscript edits, mostly copy-editing corrections, with some sections lightly crossed out with pencil and a few words inserted. Upper cover and two early leaves stamped with "V. Cardashian Library" (likely Varhan Cardashian). No. 1 in the Free Thought Library (Մատենաշար Ազատ միտք). A translation into Armenian of Rene Pinon's La suppression des Armeniens: methode allemande, travail turc (Paris, 1916). Pinon was an early and vociferous critic of the Armenian genocide and with La suppression was one of the first to identify the Young Turk's program of "exile" for what it truly was. Vahan Cardashian was born in Caesarea, in what is now Israel, and immigrated to the US, where he received a degree in law from Yale. He was an activist for the Armenian cause in the United States, and created the Armenian Press Bureau, the first precursor to the modern Armenian National Committee of America, making Cardashian one of the forefathers of Armenian-American activism. After using his own money to fund these endeavors, he died a pauper in 1934. UCLA, Cal State - Sacramento, and Michigan in OCLC. (Inventory #: 59314)
$143.75 add to cart or Buy Direct from
rulon-miller books
Share this item

[London] : Golden Cockerel Press , 1944
(click for more details about Shelley at Oxford. The early correspondence of P. B. Shelley with his friend T. J. Hogg together with letters of Mary Shelley and T. L. Peacock and a hitherto unpublished prose fragment by Shelley. Edited by Walter Sidney Scott)