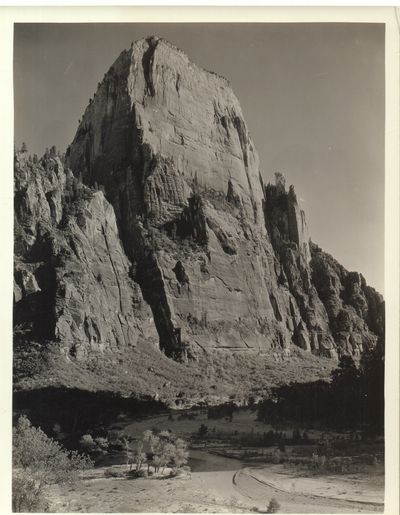 Photograph
by Grant, George Alexander
Photograph. Black and white contact print from original negative; print is dated August 29, 1929. Photo measures 8 ½ x 6 ½ inches and remains in fine condition with strong contrast and clarity. Verso, in what we believe to be George Grant’s hand, identifies this image as that used for the 6 cent [sic] stamp of Zion National Park . In 1934 the United States Postal Service announced the authorization of ten National Park stamps with official National Park Service photographer George Grant chosen to pick out the images. Grant was quoted, “we had an awful time making these selections. We even reduced those things, by copying down to stamp size. ” Grant chose two Ansel Adams images, three commercially produced images and five of his own images including this photograph of the Great White Throne in Zion National Park. The Zion stamp was issued in the denomination of 8 cents. The ten stamps were warmly received becoming one of the most prized sets ever produced by the post office. As official photographer of the National Park Service, George Alexander Grant worked for 25 years to document units of the agency, plus he traveled to various proposed units to photo-document the resources and landscapes of these areas. Grant's expertise allowed him to portray the landscape with undeniable skill and precision, often working in rugged remote locations. In 2015 Ren and Helen Davis wrote the monograph Landscapes for the People-George Alexander Grant, First Chief Photographer of the National Park Service. Because Grant worked for a federal agency he rarely received credit for his work and very few of his photos make it onto the market as most of his work is held by the NPS archives. ; B & W Photograph . (Inventory #: 023430)
$750.00 add to cart Available from
Back of Beyond Books
Share this item

Back in the Stone Age The Natives of Central Australia

Sydney, Australia : Angus & Robertson Limited , 1936
(click for more details about Back in the Stone Age The Natives of Central Australia)