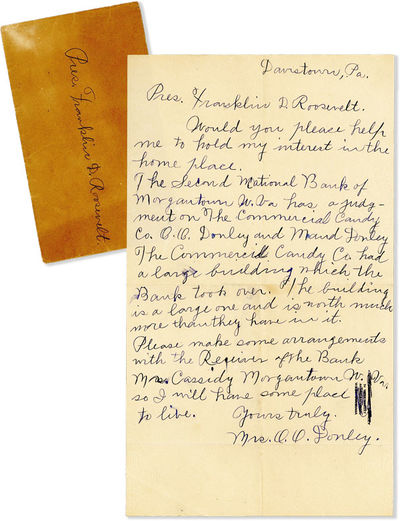 Mrs. Donley writes asking President Roosevelt to intervene in a pending foreclosure by the Second National Bank of Morgantown (WV). After listing her and her husbands assets, which include a large candy factory, she concludes, "...Please make some arrangements with the Receiver of the Bank Mrs. Cassidy, Morgantown W.Va. so I will have some place to live / Yours Truly / Mrs. O.O. Donley." The author's husband, Orris Otto Donley, a Morgantown businessman, appears in contemporary newspaper accounts as the perpetrator of an $80,000 embezzlement against his uncle's estate, a fact not mentioned in Mrs. Donley's letter.

Millions of similar messages were sent by desperate citizens to the White House in the years of the Great Depression, often, as here, in a last-ditch attempt to forestall homelessness. A collection of such letters, edited by Robert McIlvaine, was published in 1986 by the University of North Carolina Press under the title Down and Out in the Great Depression: Letters from the Forgotten Man. (Inventory #: 56165)
$125.00 add to cart or Buy Direct from
Lorne Bair Rare Books
Share this item

With Lawrence in Arabia

New York : The Century Company , (1924)
(click for more details about With Lawrence in Arabia)

London : Enitharmon Press , 1976
(click for more details about Dumb Instrument: Poems and Fragments)
View all from this seller>