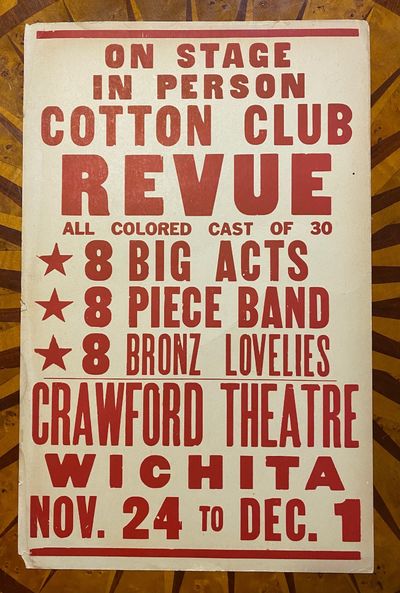 Wichita's Crawford Theater (1911-1956) was not a "black-and-tan club," but a self-described "legitimate theater." Furthermore, the American West has been relatively neglected by scholars of the African-American experience of the 1950s. Artists, musicians, playwrights, club owners, and various other players in African-American communities all over the American West fully participated in the cultural renaissance that took hold during that time. Kansas itself produced writers and artists who ultimately left the state to become significant voices. Indeed, at various times Wichita, Lawrence, Topeka, and especially Kansas City fostered their own black renaissance. Black students at the University of Nebraska, as well as those at Kansas, Iowa, and Minnesota, made their own special contributions.

Kansas City was also a central stop on the vaudeville circuit, which served the mid- and southwest regions of the country in the early twentieth century. The Theater Owner's Booking Association, or TOBA, the black-owned vaudeville company, used the city as a hub of a traveling circuit that went from Texas to Minnesota. In Kansas City they performed for black-only audiences at the Lincoln Theatre, in the city's African American business district. These events not only brought musicians and other entertainers to town, they served as a source of pride for the community.

As we learn from a contemporary article in "The Wichita Eagle" (28 Nov 1954), for the nights here publicized the top acts on the Cotton Club Revue bill were the Four Valtones, "quartet of stage and radio, recently with Arthur Godfrey's TV program. Also there are Leo Cornett and his eight-piece rhythm band; Audrey June, exotic dancer; Chick Johnson, clever impersonator and fun man; Edna Rainey, blues singer, recently with the Diamond Horseshoe in New York City, and Williams and Williams' extraordinary comedy team."

Literature: "The Harlem Renaissance in the American West: The New Negro's Western Experience" (Routledge, 2012. Edited by Bruce A. Glasrud and Cary D. Wintz).

FirstSearch lists a copy at Univ. Kansas Spencer Library only; likewise scarce in commerce: only one copy has been traced in RBH, sold recently at RR Auctions (November 2021, $250 despite "slight water damage to right side"). (Inventory #: 3617)
$400.00 add to cart or Buy Direct from
Michael Laird Rare Books
Share this item

by [TOBACCO PROHIBITION IN ITALY]

Sicily, Naples and Turin 1764
(click for more details about [TOBACCO PROHIBITION, ITALY 1734-1764]. Small collection of Proclamations, together 6 items (1 broadside + 5 bandi))
View all from this seller>