Image of The People: Gustave Courbet and The Second French Republic 1848-1851 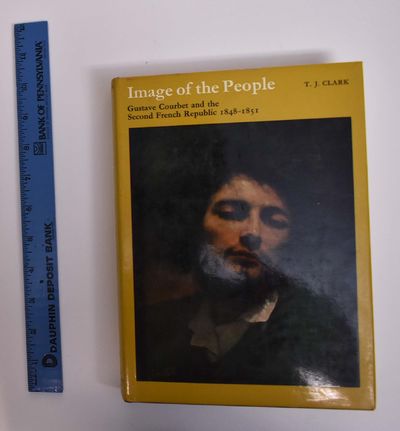 by Clark, T.J.
Greenwich, Connecticut: New York Graphic Society Ltd, 1973. Hardbound. G/G+. Some wear to dust jacket. Some writing and underlining in pen in text. Small stain on page edges.. Brown cloth, gold and color illustrated dust jacket. 208 pp., 7 color and 43 bw plates. "A study of the art of Gustave Courbet [1819-1877] in the years directly after the 1848 revolution. [The book] has aimed to rescue Courbet from the legends of the Right and Left; to destroy the image of Courbet the amiable buffoon, mixed up in politics to his own detriment; but to show also how complex was Courbet's intuition of the social and political issues of the time, and how exactly appropriate were the pictures he painted for the Salon of 1851 -- the Burial at Ornans, the Stonebreakers and the Peasants of Flagey. When Courbet showed those three pictures to a Parisian audience, they were greeted with anger, bewilderment, almost panic. This book sets out to answer the question: why did Courbet's art draw blood? What made his pictures 'popular' and revolutionary? Why was an imagery of the peasantry and the small-town bourgeoisie so provocative in Paris in 1851? ...There are times when art can disturb -- even frighten -- its public. This book describes one such moment in depth, and in doing so it proposes its own, stringent definition of 'revolutionary art.'" (dj). (Inventory #: 104521)
$33.00 add to cart or Buy Direct from Mullen Books
Share this item