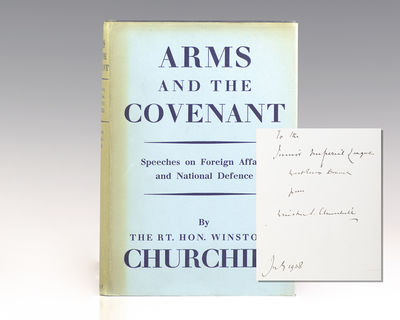 by Churchill, Winston S
London: George G. Harrap, 1938. First edition of this important collection of speeches. Octavo, original cloth, photographic frontispiece of Churchill. Presentation copy, inscribed by the author in the year of publication on the front free endpaper, "To the Junior Imperial League West Essex Branch Inscribed by Winston S. Churchill July 1938." Near fine in the rare original dust jacket, which is in near fine condition. Edited by Randolph Churchill. An exceptional example, rare and desirable signed. All but two of the speeches collected here were delivered by Churchill in the Commons in the years leading up to the Second World War. Collected by Churchill's son, Randolph, and revised a second time by Churchill, these represent some of the best written by a man who "devoted more time than any other modern orator to the preparation of his speeches" (Langworth, 190). "The finest (and most ominous) pre-war warning of Winston Churchill occurs on [its] penultimate page... Available in no other Churchill book... the last four paragraphs of that famous speech on 24 March 1938... summarize the theme of this volume, a precursor to the official theme of The Gathering Storm: 'How the English-speaking peoples through their unwisdom, carelessness, and good nature allowed the wicked to re-arm" (Langworth, 190). (Inventory #: 129374)
$17,500.00 add to cart or Buy Direct from
Raptis Rare Books
Share this item

Of Other Worlds: Essays and Stories.

London : Geoffrey Bles , 1966
(click for more details about Of Other Worlds: Essays and Stories.)
View all from this seller>