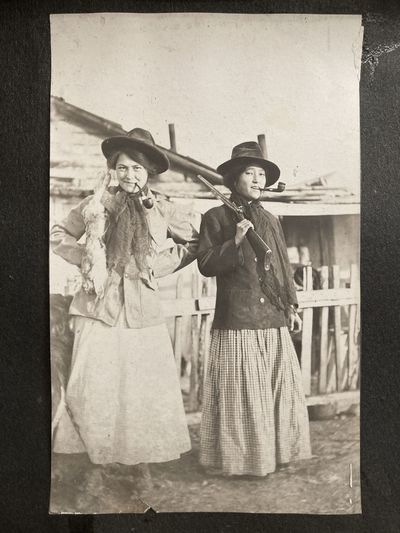 1910 · [Georgetown and other locations in Alaska

by [Alaska]. [Western Photographica]
[Georgetown and other locations in Alaska, 1910. Good plus.. 112 silver gelatin photographs on [28] leaves, including a handful loosely laid in. Small black cloth album. Moderate wear to covers, binding detaching from text block. Black paper leaves, several loose or with wear at edges. Some images with ink notation on photograph; light wear to contents, one photo torn in half, some loose. A charming vernacular photograph album from turn-of-the-century Alaska, documenting the residents and their environs, including several images of the local Inuit. Identified locales include Georgetown, Fairbanks, Paimiut, and Tanana in Alaska. Though a handful of the images appear to be professional (one is stamped on the verso with the imprint of Duke E. Stubbs of Georgetown), most are clearly amateur and taken by a photographer wandering around town capturing the residents as they go about their days. Georgetown is located in the Alaskan interior on the Kuskokwim River, about 350 miles southeast of Fairbanks as the crow flies. Street scenes show the store front and "shipping fleet" of the N.C. Company; there are also other unidentified street scenes including an image of men perched in boats on an icy river with a view of the town in the background. Other photos show residences or cabins. One photo shows a group of schoolboys, identified on the verso as "St. Matthews boys & Rev. Bettinger" posed on the steps of a wooden building for a pre-picnic photograph with their schoolmaster.

Many of the images feature women and girls, including a wonderful series of eight images showing two young women. In one photo the two pose with guns and pipes clenched in their teeth looking quite saucy for the camera. Other images show them seated side by side on a fence, smiling and laughing; yet another photo shows them standing next to each other smiling with their arms around each other, attired in proper clothing, a camera hanging around one young woman's neck. These are by far some of the best and most striking images in the album. Altogether, this is a wonderful vernacular album from what is undeniably the outer frontier, and at a very early period for photography in the area. (Inventory #: 2507)
$2,750.00 add to cart Available from
McBride Rare Books
Share this item