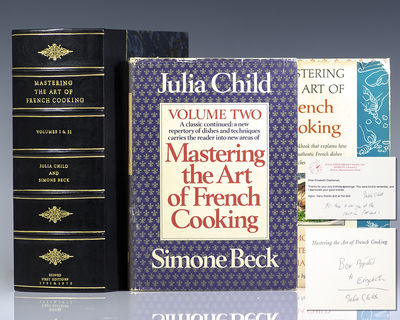 by Child, Julia; Beck, Simone; & Bertholle, Louisette
New York: Alfred A. Knopf, 1961 & 1970. First edition, early printing of volume one and first edition of volume two of of this classic cook book. Quarto, 2 volumes, original illustrated boards. Volume 1 is signed on the half-title page by both "Bon appetit to Elizabeth Julia Child." Volume two is signed with a note card from Child, which reads, "Julia Child P.S. Hope to see you at the IACP in Portland!" Volume one and two with drawings by Sidonie Coryn. Drawings by Paul Child. Both are near fine in a good dust jackets. Typography, binding and jacket design by Warren Chappell. Housed in a custom half morocco clamshell box. Julia Child’s Mastering the Art of French Cooking is arguably the most influential work on French food ever published in the United States. A "self-confessed ham, she became a darling of audiences almost from the moment she made her debut in 1963 at the age of 50" (New York Times). Listed by Time Magazine as one of the top 100 non-fiction books written in English since 1923. (Inventory #: 129921)
$5,500.00 add to cart or Buy Direct from
Raptis Rare Books
Share this item

The Diversity of Life.

Cambridge : The Belknap Press of Harvard University Press , 1992
(click for more details about The Diversity of Life.)
View all from this seller>