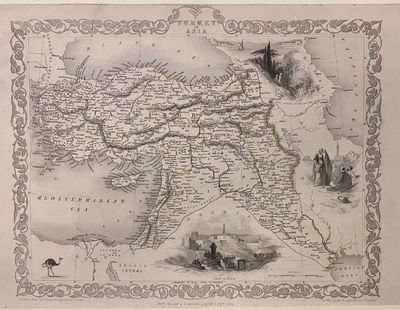 by TALLIS, John
London: Tallis, John, 1857. unbound. RAPKIN, John. Map. Steel engraving with modern coloring. Image measures 10 1/4" x 12 3/4" This map of Turkey and the Middle East covers the regions between the Black Sea and Mediterranean, extending to the Caspian Sea and the Persian Gulf. The region is abundantly labeled with the names of cities, rivers and ancient kingdoms. The decorative vignettes, illustrated by H. Warren and engraved by J. B. Allen, depict the city of Jerusalem, the Castles of Europe and Asia, as well as an illustration of figures in traditional dress conserving, and an ostrich depicted over northern Africa. The map is surrounded by a beautiful floral border. It is in very good condition. John Tallis Jr. (1817-1876) was a London born bookseller who continued the prolific map publishing company started by his father. After a partnership with his brother, Tallis Jr. expanded the business to New York in 1849 as well as Boston, Cincinnati, Rochester, Philadelphia and Baltimore. He is remembered as one of the last decorative map makers, and this lovely map exemplifies his work. (Inventory #: 304082)
$165.00 add to cart or Buy Direct from
Argosy Book Store
Share this item