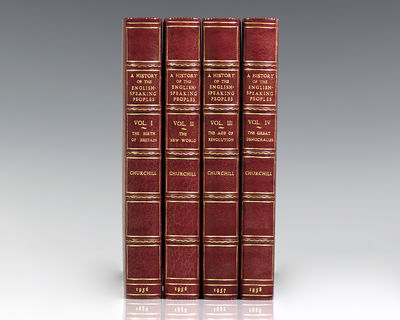 by Churchill, Winston S
London: Cassell and Company, 1956-1958. First British editions of each of the four volumes of this set. Octavo, 4 volumes, finely bound in three quarters morocco with gilt titles and ruling to the spines, raised bands, illustrated. In near fine condition. "Churchill’s last great work was published nearly 20 years after he penned its first draft in the late 1930s, just after wrapping up [the biography of] Marlborough. This enabled him to utilize the literary team he had assembled for the biography, to which he added dozens of outlines he had solicited from scholars In its final form the original single volume evolved to four, each of which was published simultaneously in Britain, the USA and Canada— a first for Churchill’s works" (Langworth, 312). (Inventory #: 129382)
$2,250.00 add to cart or Buy Direct from
Raptis Rare Books
Share this item

Joy In The Morning.

The Works of the Honourable Robert Boyle. In Six Volumes to which is prefixed The Life of the Author.

London : Printed for J. and F. Rivington, L. Davis, E. Johnston, S. Crowder, et al. , 1772
(click for more details about The Works of the Honourable Robert Boyle. In Six Volumes to which is prefixed The Life of the Author.)
View all from this seller>