Colorado: Its Resources, Parks, and Prospects As A New Field For Emigration; With An Account of the Trenchara and Costilla Estates, in the San Luis Park 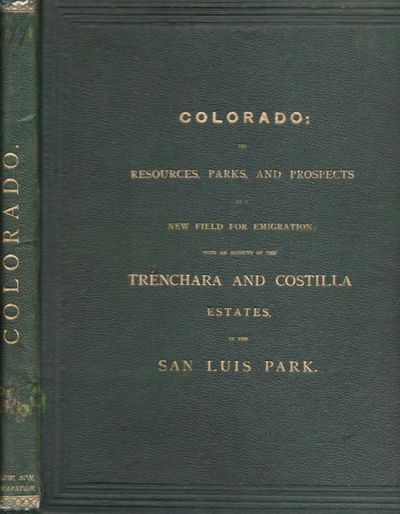 by Blackmore, William
London: Sampson, Low, Son, and Marston, 1869. First Edition. Hardcover. Fair. Octavo. 217 pages. Green cloth hardcover ruled in blind on the borders with gilt stamped title on the front cover. Illustrated with an oval albumen photograph portrait of william Gilpin, first Governor of Colorado and three large folding maps in front. Possible ex-institutional copy with 4 very faint black numbers top of the spine with a small label removed lower spine. Appears the rear flyleaf is pasted down to the rear paste down. No other markings found in the book. Covers are light shelf worn and edge worn. Corners are bumped. Heavy foxing to the end papers. The title page, frontispiece photograph, and maps all have some light to moderate foxing. Light occasional foxing to some of the text. Various copies of this work have different collations including additional plates. This copy has the frontispiece photograph and three maps only. From wikipedia: William Henry Blackmore (1827-1878) was an English lawyer who gained a fortune by exploiting a large social network as an investment promoter. He used his fortune for philanthropy, primarily centred on his interest in Native Americans, but ended his life after a failed investment deal related to the Denver and Rio Grande Western Railroad.[1]

by Norton, William L. Jr. (compiled and edited by)

Athens : University of Georgia Press , 1967
(click for more details about The Slave Ship Wanderer)
View all from this seller>