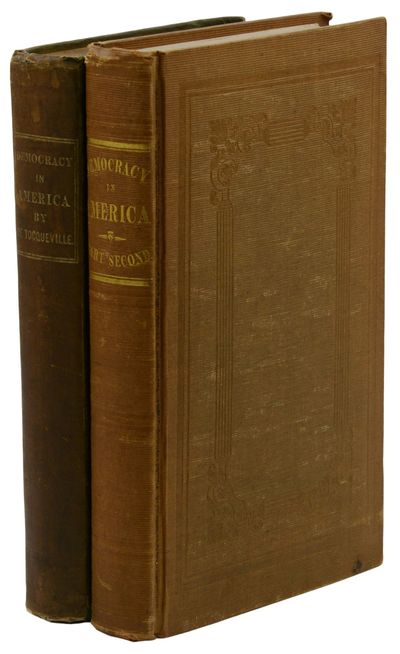 by Tocqueville, Alexis De
New York: George Dearborn and Co., Adlard and Saunders; J. & H.G. Langley, 1838. First American Edition. Very Good. 1838, 1840. First American edition of both volumes in publisher's original cloth; the first and second volumes were published separately. Two volumes, xxx, 464; xx, 355 pp. Very Good. Darkening to cloth at gutters. Volume I is in green cloth ruled in blind, with titles in gilt on spine; Rubbed and sunned with light wear at spine ends, contemporary former owner signatures to front endsheet, and a few light pencil markings throughout. Volume II is in brown cloth ruled in blind with gilt titles on spine; spine ends lightly bumped, minor dampstain and browning to front endsheets not affecting other leaves and foxing throughout.A classic work on American society, which Printing and the Mind of Man describes as "One of the most important texts on political literature." Tocqueville was sent to America by the French government to study the prison system. During his nine-month stay, he used his official business as a pretext to study American society, and wrote his classic text upon his return to France. A definitive look on America from an outsider's nuanced prospective, not unlike Robert Frank's 1959 photography book The Americans, an intimate glimpse of a culture visible only to a gifted outsider. (Inventory #: 140942499)
$20,000.00 add to cart Available from
Burnside Rare Books
Share this item
Burnside Rare Books
Offered by

New York : Alfred A. Knopf , 1994
(click for more details about The Crossing)
View all from this seller>