An Essay on Abstinence from Animal Food, as a Moral Duty 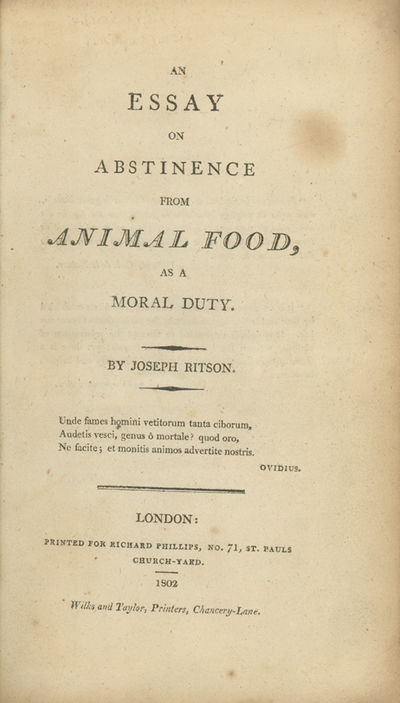 by RITSON, JOSEPH
London: Printed for Richard Phillips, 1802, 1802. First edition. Bronson, Joseph Ritson, Scholar at Arms, 27; Bitting, Gastronomic Bibliography, page 399. Text lightly to moderately foxed and browned; a good, but not ideal, copy.. 8vo, modern brown half cloth, marbled paper boards, gilt lettering, Without the four pages of publisher's terminal advertisements. An interesting treatise by antiquary Joseph Ritson (1752-1803) advocating the vegetable diet. Ritson was a committed vegetarian, whose diet, according to his biographer Bertrand Bronson, consisted of muffins, cake, cheese, bread, milk, beer and ale. His Essay, in ten chapters, draws from many quarters, from Hesoid to Goldsmith, for examples and tales supporting his contention about the benefits of the vegetarian diet. "The book was a labor of love - love for the animals, but especially love for passionately held convictions" - Bronson. Among the chapter headings are "Animal food not necessary for the purpose of strength or corpulency," "Animal food pernicious," "Health, spirits, and quickness of perception promoted by a vegetable diet," etc. Ritson's publisher, Richard Phillips, was also a vegetarian. This copy has the annotations of at least two early readers, who appear not to always be in agreement with Ritson's controversial arguments. One annotation notes a literary connection: "Charles Lamb's origin of roast pig." (Inventory #: 28719)
$875.00 add to cart or Buy Direct from
Brick Row Book Shop
Share this item

Letters from the Canary Islands

London: Printed for the Railway Companies . . . by John Cassell; Sold by M'Glashan, Dublin; Peat, Liverpool and by All Bookselle , 1853
(click for more details about The Tourist's Illustrated Hand-Book for Ireland with Numerous Engravings from Drawings by Cruikshank, Crowquill, Lover, Mahony, &c)
View all from this seller>