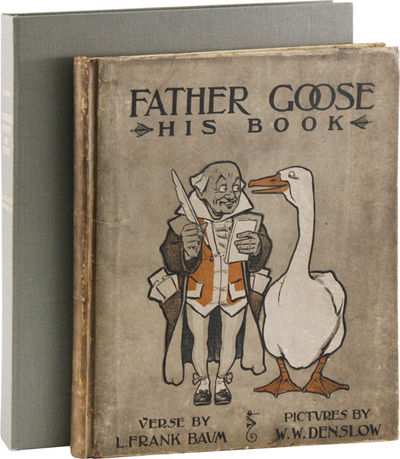 Father Goose was the first full-length collaboration between Baum and illustrator W.W. Denslow, who would go on to illustrate all of the Oz books during Baum's lifetime (Denslow had provided two illustrations to Baum's self-published book of poetry, The Candelabra's Glare, in 1898). The initial printing, completed at the end of September, 1899, was 5700 copies and quickly sold out, as the book became one of the surprise hits of the season, eventually selling more than a hundred thousand copies. There appeared, in rapid succession, six printings of between 10,000 and 30,000 copies each, in each of the three months following the initial publication, and of course these secondary printings are the most often-encountered examples. An important title in Baum's non-Oz oeuvre, the first printing is exceedingly hard-to-find and especially uncommon in unrestored condition. Lacking the very scarce dustwrapper; housed in a custom cloth clamshell box. BIENVENUE & SCHMIDT p.169. (Inventory #: 56057)
$4,500.00 add to cart or Buy Direct from
Lorne Bair Rare Books
Share this item

New York : House of Books, Ltd , 1939
(click for more details about A Note on Experts: Dexter Vespasian Joyner)
View all from this seller>