THE CARPENTER; or, the Danger of Evil Company.; Cheap Repository Tract 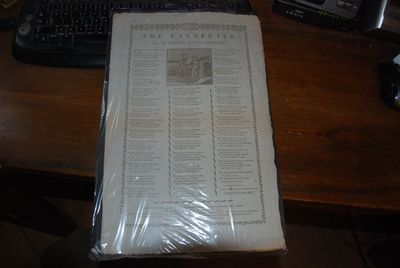 by [MORE, Hannah.]
Bath: : S. Hazard Printer to the cheap repository for religious and moral truth) at Bath; by J. Marshall, printer to the Cheap Repositories no. 17, Queen Street, Cheap-side, and no. 4 Aldermary Church-Yard; R. White, Picadilly, London; and by all bookselle, [entered 20/2/95]. Folio, Broadside, 17-3/4 x11 in, printed in three columns, with a decorative border and a woodcut at the head of the text. Signed Z, A very nice copy with original deckle edge, Scarce. Spinney calls this the first state imprint. Spinney # 4, with the imprint as noted. Taller than the other copies we have had of this over the years, with wide margins. Near fine. An attractive broadside denouncing the evils of drink. Certain publications of his repository have been positively attributed to More, others are not yet proven, although it seems most likely that she wrote them all. "With some help from her sisters and friends, she produced three tracts a month (a tale, a ballad and a tract for Sunday reading) for three years, which were sold for a penny"[DNB]. Some of the woodcuts were by John Bewick. DNB notes that the tracts signed "Z" were by Hannah, the ones signed "S" by Sarah More. (Inventory #: 59825)
$825.00 add to cart or Buy Direct from
Second Life Books
Share this item

THE HOLY BIBLE: containing the old and new testaments; translated literally from the original tongues

NY : European Publishing Company , 1898
(click for more details about THE WOMAN'S BIBLE; Part I. The Pentateuch. Comments on Genesis, Exodus, Leviticus, Numbers and Deuteronomy. Third edition- ten thousand. With Part II. Judges, Kings, Prophets and Apostles. Comments on the Old and New Testaments from Joshua to Revelation. First edition - Ten Thousand)
View all from this seller>